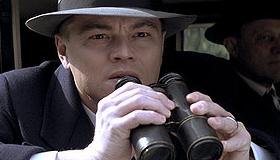 Full of Oscar-season intentions, Clint Eastwood's J. Edgar faces an uphill battle at the box office: young moviegoers have no clue who Hoover is or was, older audiences may be put off by Dustin Lance Black's non-linear screenplay and its fluid sense of time and place. There is already talk of Best Picture, Best Director and Best Actor nominations for the film, Eastwood and star Leonardo DiCaprio—hot air that will cool off during the films leviathan 137-minute running time. Eastwood's on-time and under-budget methods have always played better with aging critics and Academy insiders than they have with moviegoers (really, when people head to the movies, how often do they think "Gosh, I want to see something that was shot on-time and under-budget"?), but J. Edgar represents a low point no Eastwood aficionado can ignore.

It would be one thing if J. Edgar, Clint Eastwood's bio-pic of FBI head J. Edgar Hoover, were merely another Eastwood film shot in the cloudy, patent-medicine weak-tea sepia tones of a Ken Burns production, with its minor-key piano chords and historically appropriate pop songs. It would be another thing if J. Edgar were simply another Leonardo DiCaprio film where the star—through makeup and miracles—portrays another complex American legend whose public persona was only the smallest part of his complex life, as the actor did in the Martin Scorsese-directed The Aviator. But between Eastwood's direction and Dustin Lance Black's screenplay, what you feel leaking off the screen in every scene is missed opportunity. This material could have inspired a serious and artistic examination of the role of law and intelligence in America, of the toxic nature of secrets, or of how desperate times demand desperate measures—and make public servants into desperate (and dangerous) men. Instead, J. Edgar functions as a Wikipedia page dipped in makeup, an assemblage of half-truths, gossip, innuendo and the occasional historical fact, all drenched in latex and drained of color. It's the cinematic equivalent of the animatronic Lincoln at Disney's Hall of the Presidents: stiff, jerky, mechanical, fake.

Moving from Hoover's early days at the Bureau of Investigation-which was, in 1919, a part of the Justice Department with no funding, few police powers and not even the capability to make arrests or carry firearms—J. Edgar follows Hoover's life all the way to the '70s, where he served under Nixon and died while still head of the Federal Bureau of Investigation as we know it today. The framing device is that Hoover, eager to set the record straight—or, rather, straight by his standards—is dictating his memoirs to a succession of young agents over a timespan of decades. The irony, of course, is that Hoover's job demands projecting a public image, and public images demand private compromises. Hoover, it seems, didn't do the things he said he did, and did many things he never speaks of. But there are throwaway bits in James Ellroy's American Tabloid that say more about the real Hoover than all of Eastwood's purported life story here. Hoover was convinced organized crime was fiction in the '50s—which it was not—and obsessed with finding communist agitators in the Civil Rights movement, motivated by pure racism. For 50 years, he had the power of warrantless wiretaps, relationships with the press, a fiction-fabricating media-machine and all of the force of the Federal Government. Eastwood's film and Dustin Lance Black's screenplay shove all these big (and currently relevant) questions aside for fluff. Their major concern: was Hoover really a closeted homosexual and occasional cross-dresser?

This gossip about what Hoover really had on under his flannel suits is decades old. The Mihtrokin Archive of stolen KGB documents suggest that the KGB had a role in spreading the Hoover-is-gay rumors in an attempt to undermine the man, while McCarthy aide Roy Cohn, himself a homosexual, has implied that Hoover was, at best, asexual—afraid of sex and the attendant loss of control. Possibly true, moderately compelling. But even putting aside the question of if movies have to provide historical accuracy—not the necessarily the case, as you can enjoy the vulgar melodrama of Anonymous while still recognizing Shakespeare's authorship—the better question is if Eastwood and Black can make Hoover's purported homosexuality dramatically interesting. Enter Armie Hammer, who plays Hoover's right-hand man Clyde Tolson with a knowing wink and a sense of fun that comes perilously close to camp, while suggesting that (with the exception of two hand-holding sessions and one kiss) their relationship was completely non-sexual. Black's script for Milk was a masterpiece of sensitivity, honesty, and insight; his script for J. Edgar is, at best, Masterpiece Theater. Early on, a supporting character notes, "You know, the funny thing about adoration ... it leads to villainy." Thanks for the tip, as otherwise I'm sure we'd be too dense to figure the thematic notes of the material if we weren't given on-screen Cliff's Notes within the first five minutes.

The performances are all as good as they can be. DiCaprio's Hoover is a repressed martinet with extensive, expensive old-age makeup transforming him from a sleek, speedy young keener into an aging-but-still dangerous bear of a man. Judi Dench's work as his mother is a bundle of clichés wrapped in lace, Hammer provides the occasional much-needed spark of life and wit yet comes perilously close to Paul Lynde-levels of irony and self-mockery, and Naomi Watts suffers at length as Hoover's long-suffering personal secretary Ms. Gandy. The most exciting plot sub-theme—the Lindbergh Baby Kidnapping, which Hoover helped solve only to use it as a springboard to gain new powers for himself and the Bureau—is hurt by being cut up and interlaced with other material. (Would that this were its own film, by any other director.)

Like his anti-Apartheid soccer drama Invictus, J. Edgar is a look at history from a comfortable remove, when we can tut-tut over how bad things were while appreciate some fine old Hollywood stars . A great filmmaker would make a movie about racism in South Africa in the here-and-now, or about the FBI's warrantless wiretaps, ballooning budget and Keystone Cops errors in our current age—but those things would make the audience uncomfortable with the ugly facts of now. Better just to lull them to sleep with visions of Oscar-worthy performances dancing in their heads. Clint Eastwood is under no obligation to give audiences true history or social commentary worthy of our age, but he should try to give us something, anything other than rumor and urban legend, narcotic nostalgia and another limping, age-wearied steed cluttering the Oscar race.