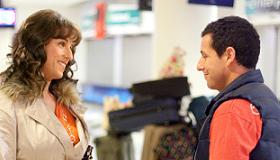 Every year, as regularly as the Razzies, Adam Sandler makes another comedy. For him, it's like going away for summer camp. He gets to joke around with all his best friends—Rob Schneider, Tim Meadows, David Spade, Nick Swardson, Dana Carvey, Norm MacDonald, longtime director Dennis Dugan—and at the end, he's made a 90-minute souvenir of their super-fun hangout...and several million dollars. It's a good life. And after 16 years of it, Sandler's so comfortable with its clockwork regularity that he can't even disguise his own entitlement—heck, he can't even play characters who are middle-class, or even change out of his every day Yankees cap. But what he is willing to do in Jack and Jill is add boobs. (And no, I'm not talking about giving Bruce Jenner and the ShamWow guy cameos.) Playing both himself—almost literally himself—and his twin sister, Sandler's bequeathed to the audience a sensitive study of gender dynamics and the emotional vacuum created when the elder favored son gobbles up all the glory. Scratch that: Jack and Jill is a barrage of fart jokes and fat jokes and mean jokes that sincerely thinks it deserves to end with a hug. It doesn't deserve awwwws—and it doesn't deserve your money—but consider the millions it will make in ticket sales a tithe to get him to go away for 12 more months.

Here's the plot in a nutshell, which is frankly all the room it needs: Jack (Sandler) has a big California house, a creative job, a hot wife and two kids. Not exactly a stretch. But Jack's fraternal twin Jill (Sandler) is the comedian's former id—a loudmouth New Yorker desperate for attention. Jill is a hot mess minus the hot (though her makeup and clothes are actually kinda cute). She's needy, sweaty and—gasp!—still single at 42. And her raw Bronx accent exposes Jack and his bland West Coast mumble as a guy trying to get far away from his own DNA. Or it's just lazy thinking. Whichever.

Jill is Sandler's most outrageous creation in a decade, minus his swaggering Zohan. Some time around 2003, Sandler decided to play the straight man in his own comedies, and the results have been a slog. In every flick, it's the same shtick: he plays a guy who's wealthy enough to try to buy a solution to his problems, and has a big mea culpa at the end when he realizes he's been a bit of a selfish prick. (Even in Funny People he was still playing Sandler.) But in Jack and Jill, he's even more muted—Jack has two settings: whine and rage.

What made Sandler's career was being an overgrown kid. The nasal voice, the boundless energy, the wide-eyed wonder and appreciation made him a star. But now he's 45—he's almost outlived John F. Kennedy—and adulthood has upended his persona. Though he still dresses like the scamp, even in his movies he's become the grump, the naysayer who doesn't like to smile and only cares about money. He's the least fun person in Jack and Jill and we're talking about a movie that co-stars Katie Holmes.

Which is a good time to mention that Jack and Jill also stars everyone else from Jared Fogel of Subway to Shaquille O' Neal and Regis Philbin. If Sandler can't make people laugh, he can at least show off his Hollywood clout. His biggest coup is convincing Johnny Depp to pop by and wear a Justin Bieber shirt—I wanted to believe it was an impostor until I checked the credits. And, of course, the big name on the poster is Al Pacino, who's gone on an inverted career path from Sandler—he's now better at comedy than drama.

Pacino putters around in baggy jeans playing himself in a near-alternate world: like reality, he's doing Shakespeare on the stage, but he's here also madly in lust with Jill (much to everyone's surprise) because he considers her the Bronx-bred, straight-talking anchor his life needs. For the film this is key because Jack's totally willing to pimp out his sister to cut his own deal with Pacino. For the audience, this is intense because if we have to endure a scene of Pacino tickling Sandler's grapefruit breasts, the actors sure as hell better seal the deal by riding the joke all the way out for a tongue kiss. Alas, the wimps stop short at a cheek peck. Which made me feel funny inside: I hate prison rape jokes, but if Pacino-on-Sandler action is your trailer's selling point, the movie better be brave enough to have Pacino bend him over. Heck, it's already doing the same to us.