close
The view may be hot, but the sex is not. 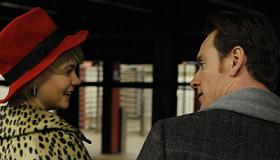 Every so often a hot potato sex movie comes around, challenges the rating system, gets compared to Last Tango in Paris and manages to draw a curious audience to see what the fuss is all about. Shame, an indulgent drama about the sexual, emotional and moral free-fall of a sex obsessed New York man premiered at the Venice Film Festival earning lots of buzz as this season's au courant shocker. With an effective if not likeable lead performance from Michael Fassbender and a game change of pace for recent ‘it' girl Carey Mulligan, it would seem the intent of Shame is to show us how far down one person can fall into sex addiction, but the real question will be: Does anyone really care? Initial business during its limited arthouse release December 2nd should be brisk, but without some significant awards action the patience for all of this may wear very thin. Its rare NC-17 won't help in the long run but could provide another motivating factor for the curious.

There can be no doubt writer/director Steve McQueen is a serious filmmaker. He had a nice calling card with Hunger, at least to critics who continue to champion his minimalist style. Hunger established it and Shame cements it, although the new film is likely to be more accessible than the latter (which also featured Fassbender). Holding shots for many minutes at a time, employing extreme close ups and letting his actors do the heavy lifting McQueen is the auteur darling of the moment and despite some questionable filmmaking tendencies he has undeniable talent and clear ideas of the story he wants to tell. The problem for some is they just won't want to hear it.

Fassbender plays Brandon, a good looking New Yorker who falls victim to his own sex drive, an obsession that takes him spiraling out of control as his seeming quest to feel nothing sets his meter to self-destruct. This is complicated by the arrival of his drifting sister Sissy (Muligan) who invades his attractive, if antiseptic, Manhattan apartment. She obviously has her own problems and their oddly kinky relationship does no favors for either one.

It's clear McQueen is trying to say something about the tenuous hold we all have on human longing and with these actors the film definitely has its moments. Yet it lacks the power of something like Nicolas Cage's descent in Leaving Las Vegas or the daring bravado of Brando in the aforementioned Last Tango. Fassbender nevertheless gives it his all—and then some. It's a raw, naked performance (both literally and figuratively) and the extensive nude scenes and distant, unemotional sex make for a demanding part, one he fulfills about as well as anyone could. Mulligan is also in for extensive nudity and humiliation and pushes her career in challenging new directions. One downside of her performance has her singing a rendition of "New York New York" so long there might be lyrics in there Liza Minnelli hasn't even heard.

Overall it's a game effort but despite its strong ambitions and provocative themes, Shame may leave you just like its main protagonist—in need of a very cold shower.