close
It's time to start the music 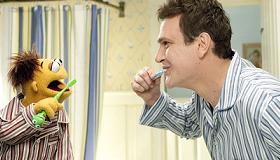 The Muppets gets a brilliant makeover from director James Bobin and screenwriters Jason Segel (who also stars) and Nicholas Stoller who have re-energized a dormant franchise. The whole gang returns, plenty of cause for celebration. With this story about a major showbiz comeback for "has-beens" Kermit, Fozzie Bear, Miss Piggy and the rest, the filmmakers have smartly created a new Muppet-wannabe named Walter whose heart and soul drives this film—and indeed the whole franchise—forward. Box office should be greener than Kermit with possibilities of numerous sequels down the line for Disney.

Segel clearly has the passion to drive this reboot forward—he even included his love for Muppets in his 2008 comedy, Forgetting Sarah Marshall. He took the concept to Disney, which certainly was looking for a new edition after the series ran its course over a decade ago, but his and Stoller's vision won the day and so does this joyous and hilarious marvel of a movie. Starting out with a sweet, toe-tapper, "Life's a Happy Song" sung by Gary (Segel) and his BPFF (Best Puppet Friend Forever) Walter (voiced by Peter Linz), the pair vacation to Hollywood with Gary's longtime (and long-suffering) girlfriend Mary (Amy Adams) where Walter feeds his obsession with all things Muppet by visiting their famous studio. But when they get there, they discover the place has gone to hell and the Muppets are out of the business. One top of that, an evil Texas oilman (Chris Cooper) plots to bulldoze the studio in a greedy quest for the bloack gold underneath the property. But Walter and Gary scheme to reunite the gang for a telethon that would raise enough money to save the studio and re-ignite the Muppets' careers. So after enlisting Kermie, Fozzie Bear, Gonzo, Animal and the ever-difficult Miss Piggy (working as a Paris fashion magnate), now they have to put on a show.

The filmmakers get that the late Jim Henson's brilliant creation is not just kids stuff—it's revered by all ages. And Segel is brave enough to tinker with the format and characters, but stays true to what made the Muppets so memorable in the first place. The film is beautifully crafted by Bobin, as technicolored and happy as a musical picture has any right to be, and there are plenty of affectionate tips-of-the-hat to the core of Muppet mania. Segel and Adams are perfectly cast as grown-up innocents, but of course the Muppet crew are the real stars. Plus there are lots of human guest star cameos to look out for. The new member of the family, Walter, is an inspired addition—Jim Henson would approve. In fact he would approve of the whole new enterprise. The holiday season just got a whole lot brighter.