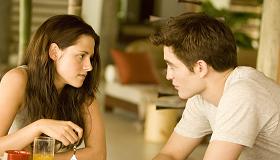 Social conservatives have applauded the Twilight series for emphasizing the importance of abstinence before marriage, while the teenage girls powering the Twihard base have swooned over pale pretty vampire Edward Cullen (Robert Pattinson) offering up romantic forest idylls and werewolf Jacob Black (Taylor Lautner) exposing his abs at the slightest provocation, both courting Bella Swan (Kristen Stewart) without so much as hinting at a threat to her virginity: they're sexily sexless. A more accurate subtitle for The Twilight Saga: Breaking Dawn - Part I would be Breaking Bella's Hymen, since the time for marriage has come: at age 18, Bella's ready to marry Edward and get her freak on. Sex and abortion are the main topics of this installment, which tips between dullness and total camp. Quality's never been an issue with the target audience; this'll make a fortune.

Breaking Dawn gives tweens what they came for in the very first shot. "Childhood is not from birth to a certain age," Bella muses irrelevantly in voiceover, quoting Edna St. Vincent Millay as Guillermo Navarro's camera tilts down from fakey storm clouds to a roof, then arrives at ground level as Jacob—devastated at receiving his wedding invitation—tears off his shirt in despair, turns into a werewolf and runs away. Having given the crowd the six-pack they crave, Jacob keeps his top on for the rest of the running time, which hardly seems fair.

In the meantime, Bella gets ready for the big day. Director Bill Condon nods briefly to his 1998 James Whale biopic Gods and Monsters when Edward explains in flashback that in the ‘30s, he broke away from his clan, feasting off human blood rather than animals. Sitting in a theater showing James Whale's 1935 Bride of Frankenstein, Edward eyes a young woman leaving, tracks her through the hallway—and attacks the presumable rapist following her. Even in his transgressions (like killing a bunch of would-be sexual deviants and murderers), Edward's too nice a fellow to take advantage of a woman.

During her wedding, everyone seems indecently fixated on Bella's pending deflowering. "Bella, I hope you've gotten enough sleep during the last 18 years," one wedding toaster hoots, "because you won't be getting any for a while!" Red rose petals sprinkled suggestively on the white carpet leading to the altar drive the imagery home, as does the similarly-color-coordinated honeymoon suite. (Edward's sexual status isn't of interest to anyone. "What, you're not a virgin?" Bella snorts when he says he has something to confess. He doesn't answer.) But for fans, too, this is a big moment: now that Edward and Bella have been legally sanctified, the big day's come, and the press screening audience applauded their morning after.

Before that, though, Jacob comes to the wedding, dances with Bella in the woods a bit and flips out when he learns the happy couple is planning to have human-vampire intercourse. That's dangerous, he screams—it won't just be virginal blood on Edward's, er, conscience, but metaphorical blood, too. The couple ignores the warning and heads off to Rio de Janeiro, signaled by a helicopter shot of the famous Christ the Redeemer statue looming over the city. (Pattinson speaks a serviceable Portugese.) Here, among happy samba-ing Brazilians, Edward and Bella slow-dance just like at their wedding: the world's most lugubrious couple never speeds up the tempo—the most memorable part of their wedding is their making out at the altar for a good 30 seconds. Then it's off to a private island and house. Bella showers, shaves her legs and wanders stark naked into the ocean. The happy couple retreat to bed, and just as things are getting good, Condon discreetly fades to white.

Audiences won't be as frustrated as Bella, who bruises easily when super-strong Edward grips her in the throes of passion. He promptly refuses to have sex with her in human form ever again out of fear that he'll get out of control and hurt her. (Considerate as he is, Edward's apparently failed to consider how unfair and unpleasant a honeymoon of celibacy would be, though he does note that "last night was the best night of my existence.") When Bella gets pregnant, Jacob's dire prediction comes true: the mutant baby-half-human, half-vampire-threatens her life. The only chance she has is to bring the child to term and get converted to vampirism right after delivering. But will Bella live to see Part 2?

Anti-abortion/pro-life activists will be happy that Bella doesn't consider Edward's demand to "get that thing out" for even a second. "Thing?" she echoes unhappily, confirming that even a baby threatening its mother's life deserves a chance. Back in Forks, Washington, Bella makes it clear she's keeping the child, while those around her argue her choice. ("The fetus isn't good for Bella." "Baby. Say the word.") "No, it's not your decision," Bella firmly tells everyone. While Edward researches her chances of survival using Yahoo!'s search engine (not a Google man), the werewolves gather outside to attack the fetus. Though Jacob can't sleep with Bella, he still won't let her be harmed. While the vampires prepare to aid Bella indoors, he restlessly patrols outside. The big birth scene itself—so graphic and body-fluid-oriented in the book fans wondered if Breaking Dawn would get slapped with an R rating—lasts all of 30 seconds, with the blood and non-anesthetic birth soft-pedaled.

Four films in, the love triangle is as static as it is unthreatening. Once again, Bella gets cold and Jacob steps in to warm her (something the cold-blooded Edward can't do). Once again, Edward's so stupidly patient and apologetic you wish he'd get drunk and say something vile. The dialogue stays within the coloring-line basics, even when Jacob's pining away. "Don't do that," he begs. "What?" says Bella. "Smile like I'm your favorite person in the world," he replies. A less-patient werewolf would've understood that Bella's an emotionally inconsiderate person who doesn't care about his feelings and just wants him there to make her feel better while expecting him to keep his romantic and sexual urges to himself, but Jacob's made of sterner stuff.

The dialogue's impossible and—for anyone that's not a true believer—the series' recurring features never get less weird. Only the truly devoted could fail to laugh when the CGI werewolves gather and snarl at each other while communicating telepathically. After Anna Kendrick as Bella's snarky classmate disappears, intentional laughs die and all that's left is the usual preening, dead line readings and occasional vampire-werewolf fights. (It's hard to tell where the $263 million budget for this and Part II went: the wolf fur looks OK, but the combat is a classic example of live-action actors unconvincingly flailing with air, and the locations remain dowdy.) After the dullness of the marriage and honeymoon, the promised drama never arrives: Breaking Dawn moves from lull to lull. The film's laughable, yet not unengaging. The fact that all this is normal gives the film a daffy kind of charm; it'll age as well as a meticulously tended mullet. But it's devoid of even a fraction of the charisma and passion that would justify all that teen ardor. It doesn't matter: the Twilight series transcends quality.