close
It's nonsense, but boy does it steal laughs 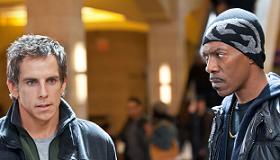 Eddie Murphy is back in top form, reason alone to see Tower Heist, a highly entertaining and heartfelt action comedy that ought to steal more laughs than any other film this holiday season. Because it doesn't take itself too seriously or get too wrapped up in a convoluted plot, it's actually more fun than Ocean's 11, 12 and 13 added together. Set around a plan by a group of New York apartment employees to steal back $40 million ("give or take $10 million") from a Bernie Madoff-style embezzler, this amusing caper is the kind of timely populist entertainment that should result in a nice cash haul for Universal. With Murphy and Ben Stiller making a successful team, expect strong box office for several weeks.

Director Brett Ratner uses his experience on the uber-successful Rush Hour trilogy to once again choose a terrific ensemble cast led by Stiller as the high energy manager of a Trump Tower-type New York apartment building who employs the services of a street-wise low level criminal named Slide (Murphy) to help steal back millions in his staff's entire pension fund that was embezzled by Arthur Shaw (Alan Alda), the building's most famous tenant who turns out to be a slick Bernie Madoff-type investor who pocketed all the money for himself. With this motivation Ratner and screenwriters Ted Griffin and Jeff Nathanson spin every possible scenario, and of course defy credibility—c'mon, don't all caper flicks do that?—in a story that takes a lot of fun twists and turns that eventually culminate in a brilliantly choreographed third act set piece set against the Macy's Thanksgiving Day Parade.

Ratner has a lot to work with and gets top notch comic performances from everyone. Stiller the straight man is tailor-made to play the idealistic manager who unknowingly throws away his staff's life savings and is determined to get it back. Murphy (who also produced) seems totally re-energized—like his best moments in 48 HRS. and Beverly Hills Cop delivers one great line after another. Sadly, he's given little to do in the film's last third and you wish the filmmakers found a way to give us ever more Murphy. Alda is pure evil as the golden-fingered Shaw while the rest of the crack team—a droll Matthew Broderick as a disgruntled investor; Casey Affleck as a good-natured concierge with an eight-months-pregnant wife; Michael Pena as a rookie bellhop; and best of all, Gabourey Sidibe, hilarious as a sexually thirsty Jamaican maid with a talent for picking locks—all get their moments. Tea Leoni as the FBI agent on their trail makes the most of a standard role. With its old fashioned sensibilities and comic stunts, this crowd-pleaser is implausible if you stop to think about it—but who wants to think?