close
For the birds

We Bought a Zoo 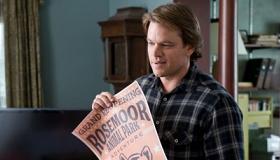 With We Bought a Zoo—his first outing since the disaster of Elizabethtown—filmmaker Cameron Crowe won't suffer another total commercial and critical flameout, but this is no return to form. An uneven mix of middle-age anxiety and family comedy, Zoo isn't the full-on, bring-the-kids, animal-friendly adventure movie that the advertising implies. Rather, it will work better with adult audiences looking for a temporary salve from a troubled world than it will for any children they drag along. Box office won't be wild, but it should keep Cameron in business long enough to try again.

Looming disconcertingly over We Bought a Zoo is the recent tragedy in Zanesville, Ohio, in which a suicidal amateur zookeeper's menagerie ran amok and was put down by authorities. Fingers crossed for Matt Damon, playing a widower who moves his teen son and young daughter to a ramshackle private zoo he buys on an ill-considered whim. Through no fault of Crowe's other than unlucky timing—he adapted Aline Brosh McKenna's existing draft of Benjamin Mee's memoir—Zanesville's ugly specter lends the film an air of impending disaster that it patently doesn't intend, and frankly doesn't deserve.

The film begins with a series of short tableaux that introduce Damon's character as a man of adventure, narrated by his son. The scenes feel like a more realist take on the diorama whimsy of Wes Anderson, but both the voiceover and that notion are soon dropped. Them Crowe switches gears to emphasize the harried scheduling of sandwich-making and school drop-offs and trying to find time to grieve, in scenes where Crowe seems to be cribbing off the emotional currency of Judd Apatow in his less crowd-pleasing moments. But once the zoo plot kicks in, that falls away too. It's as if in an attempt to reconnect with his own distinct voice, Crowe is touring through the protégés who followed in his footsteps as he followed the path of James L. Brooks. These directors all specialize in that caustic softness that lends an old Hollywood sheen to modern-day plights. But this is no new millennium Doctor Doolittle.

As such—and as it was with Elizabethtown—We Bought A Zoo feels like a film of parts and pieces that never coheres into a solid whole. The ridiculous mechanics of the zoo plot—mostly the need to pass an inspection before they can open to the public—simply overwhelm whatever emotional realities Crowe was looking to explore. His interest in grief, fatherhood and how to hold onto old memories while opening up to new loves becomes secondary and underdeveloped.

At this point in his career, Damon can play this sort of harried earnestness without breaking a sweat. His performance feels largely uninspired, oddly interchangeable with his recent turn in Contagion. Yet Scarlett Johansson brings a compelling and unexpected earthiness to her role as a young zookeeper who's also in over her head—if only she had more of a part. Other employees/hangers-on at the zoo fare even worse: some never even get a name, let alone a line of dialogue (including even Crowe's own mother).

As the love/motivational interest for Damon's son (Colin Ford), Elle Fanning is a goofball charmer, per usual, but the way she's used feels slipshod and programmatic. Ford himself is wildly over-matched by both Fanning and Damon, and the story sags every time it shifts to explore their father-son dynamic.

For all his reputation as "the music guy," Crowe's choices in song selection have become thudding and obvious. When Ford is expelled from school, Crowe fires up Tom Petty's "Don't Come Around Here No More." During a melancholy rainy-day montage, he uses Randy Newman's "I Think It's Going To Rain Today." He even revisits the same albums by Neil Young and Bob Dylan he's already dipped into before and merely picks a different track. (It's not as if those stalwart artists don't have a big enough catalog to chose something fresh.) And the original score by Sigur Rós member Jónsi sounds like a single looped track entitled "Perennial Uplift."

We Bought a Zoo feels like a tentative throat-clearing, a first step on the road back to artistic confidence and self-possession. An odd and unsuccessful mix of heavy emotions and whimsical lightness that strives to be both a film about family and a family film, managing neither, Crowe needed at least one more pass as a writer and firmer grasp as a director to pull off the tonal transitions he seeks. He's trying to make a work of healing generosity, but his keep-it-positive worldview seems less and less convincing and more and more out-of-touch with the times. Crowe may yet reemerge as the real-world Wes Anderson, Billy Wilder, Jr. or rock-and-roll Jim Brooks, but it will take more than this.