close
We Need to Talk About Alvin

Alvin and the Chipmunks: Chipwrecked 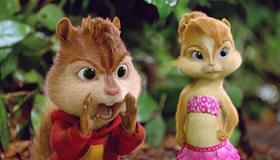 The enduring and hugely lucrative Alvin and the Chipmunks franchise is back for a third installment of its current cinematic iteration, a live-action/animation hybrid in which Dave, the world's most miserable man, travels on a cruise ship towards the awards show at which his gaggle of chipmunk children are slated to perform. Here's the story: Dave and the gang eventually find themselves stranded on a deserted island. It explodes. There was the story. Directed by Mike Mitchell (Deuce Bigalow: Male Gigolo), Chipwrecked is the sort of Sunday afternoon trifle that will mollify children and mortify their parents, an eyesore that auto-tunes its strong cast into anonymity and undercuts its convincingly rendered CG leads by confining them to hideously cheap environments. Cinematographer Thomas E. Ackerman (A.K.A. the legend who shot Back to School) is helpless to mitigate the film's apathetic aesthetics, which, to their credit, are eventually so bland as to evoke a certain Hanna Barbera charm. Likely impervious to uniformly brutal reviews, Chipwrecked should make a killing as families flock to such reliable (and mercifully 2D) holiday entertainment, but with so many parents still haunted by 2009's noxious Squeakquel, expect attendance to dip a touch below the franchise's benchmarks.

It's inevitable that the latest biannual return of the Chipmunks feels like more of a product than it does a film, relentlessly selling itself for nearly 90 minutes in order to survive. After all, the Chipmunks have been a high-pitched mouthpiece for material desire since Alvin first begged for a hula-hoop in the Ross Bagdasarian novelty song introducing the characters in 1958. But while the brands the movie pushes are all of the usual variety (Carnival Cruise Lines, Lady Gaga, the inescapable infinitude of our own pop culture), the context in which they're lazily delivered is surprisingly prickly and unashamed, as Alvin and the Chipmunks: Chipwrecked boldly concedes to its franchise's rich heritage of greed and self-interest.

Once upon a time, a struggling songwriter named Dave (Jason Lee) had a fateful encounter with a trio of shrill talking chipmunks named Alvin, Simon and Theodore (Justin Long, Matthew Gray Gubler and Jesse McCartney, respectively and supposedly). The furry little guys now regard Dave as their father, effectively ruining his life at every available opportunity while providing him nothing but occasional cuteness in return (one suspects that the chipmunks act out because their guardian is the least interesting man alive). Incidentally, Alvin, Simon and Theodore are also world-famous musicians, unless of course there's a moment in which it might be comically convenient for someone to be confused by the sight of a singing forest animal. Oh, also, the Chipmunks are joined by The Chipettes, female doppelgängers who perfectly gender reflect the titular trio in every way save for their tube tops and glaring inability to ever motivate the plot (Dave adopted the Chipettes at the end of The Squeakquel because he hates himself).

The creatures are slated to perform at the International Music Awards (although The Grammys would have been more believable), and they decide to get there via cruise, which is a perfectly reasonable mode of travel for the surrogate father of six anthropomorphized animals who live to wreak havoc in contained high-risk environments. Within moments of boarding, Alvin's antics have already rankled Captain Corelli (the kids in the audience all obviously cheered in unison at this reference), and once the film has satisfied its promotional obligation to Carnival Cruise Lines, twin hang-gliding mishaps strand everyone on a remote island in two separate factions, each unaware that the other has befallen the same fate. The Chipmunks and Chipettes realize they have to explode their archetypes in order to survive, especially when Simon is bitten by a spider that Stefan Urquelle's him into a dashing French romantic named Simón (seriously) and Alvin is forced to be the responsible one. They make friends with Zoe (Jenny Slate, A.K.A. "The Girl Who Swore" on SNL), who's been stranded on the island for years, over time transforming into Tom Hanks' character from Cast Away. The assorted collection of sporting goods she keeps for company is one of the film's only successful gags (and well-integrated examples of product placement), especially when a rampaging basketball terrorizes one of the Chipettes in a scene that plays like a cross between Indiana Jones and Quentin Dupieux's Rubber.

Meanwhile, Dave is stuck with his arch-nemesis, Ian (David Cross), who spends the entire movie dressed like a giant pelican (as one character sighs: "It only hurts when I try to explain it"). Sorted into their groups, everyone pretty much just waits around for the volcano at the center of the island to erupt, burning all of the characters alive beneath merciless waves of flesh-melting lava. It's the kind of narrative that Pixar would squeeze into a short, but it's become customary for the Chipmunks films to be inflated to feature-length by having its eponymous characters reach back to their roots and sing a battery of pop hits, the eerie timeliness of which recalls the parodies of Date Movie and Epic Movie's Friedberg and Seltzer. This film will sell soundtracks by the boatloads, and ultimately that's the idea to which Chipwrecked is unblinkingly committed: Money is the only reward that can satisfy the miseries of modern living. It's a sad evaluation, and one that makes for a film that is at once both painfully dull and deeply unnerving.

Alvin and company bring Dave nothing but torture. He's miserable to have children. He's Louis C.K., but without the implicit sensitivity that betrays the comedian's struggles as those of a decent man and an extraordinary father. You half-suspect that Dave elected for the gang to take a cruise so that he can conveniently dump the bodies over the side. In fact, Dave is happy precisely once during the course of the film (spoiler alert): When he watches The Chipmunks and Chipettes perform on the International Music Awards stage, an act which keeps their careers afloat and presumably nets them a nice paycheck in the process. It's as if the smile creeping over Jason Lee's face, which has been so stiff until then, is saying "Ah right, this is why I put up with the nightmare that is my life."

It's not as if this is a rare opportunity for him to see his children perform, or as if the stage satisfies a profound desire mutually shared amongst the glorified squirrels (there isn't a frame of the film during which Alvin and his siblings aren't keenly aware that we're watching them). No, Dave is psyched cause he's pulling in some mad bank, an idea Mitchell underscores by denying Dave his own shot during this uncharacteristic moment of ecstasy. If memory serves, Dave is lumped into a two-shot with Ian, the money-minded former record executive who, just one scene earlier, vocally redoubled his efforts to cash in on the Chipmunks' fame. Their conflated images are the last things we see before the film exhales into its closing credits sequence.

Zoe, it's worth mentioning, is also motivated by greed, and after her hidden treasure melts away, the film leaves her at a crossroads not entirely unlike that which faces Tom Hanks at the end of Cast Away—without those riches she is nothing and nowhere, and that's precisely where the film leaves her. At one point, Chipwrecked even pauses for Jason Lee to ask another character, "Do you think I'm in this for the money!?" The question is posed rhetorically, but the film spends the brunt of its remaining minutes responding to it, anyway, and the answer is a resounding "Yes!" Sure, film history is replete with movies that were obviously motivated by profit alone, but Chipwrecked is the rare studio tentpole that doesn't merely defend that tact, but also presents it as an ethical imperative.