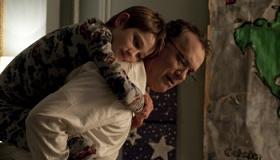 Although there have been several theatrical releases and TV movies made about 9/11, few have stirred the soul like Extremely Loud and Incredibly Close. It's an emotional powerhouse of a film, an unforgettable and rewarding motion picture experience. Centered around a young boy's search for answers in the wake of his father's death in the World Trade Center, director Stephen Daldry's film is perhaps the first on the subject to deal with the matter on such a raw level. Is the timing right? Only ticket buyers can answer that, but with this film's superlative cast and careful handling of its tricky subject the answer would appear to be "yes." Warner Bros. is wisely taking this out carefully, platforming on Christmas Day in New York and Los Angeles and going wide on January 20. Box office should be respectable with the draw of Hanks and Bullock (in her first role post-Blind Side Oscar) luring them in, but the film really belongs to the kid whose image is key to the film's marketing campaign.

Based on the 2005 bestseller by Jonathan Safran Foer which was told in the first person by 11-year-old Oskar Schell (Thomas Horn), the film follows the kid's journey as he travels the streets of New York City one year later, trying to unravel the secret of a key left behind by his father (Hanks) who died in the Twin Towers. With his mother (Bullock) emotionally unavailable, he sets out to find answers that will give him closure as he goes from one location to another, meeting a variety of people who may not be able to satisfy his quest but prove to be survivors in their own way. Among them is an older man who does not speak (Max von Sydow) but who provides a strong link to Oskar's past and serves as a catalyst for his adventure. The raw wounds this journey opens and the difficulties he encounters dealing with his distant mom form the basis for most of the drama.

Where Extremely Loud and Incredibly Close succeeds most is in Daldry's intimate direction and expert guidance of Horn, whose only previous experience in front of a camera was as the winner of Kids Jeopardy. That he is able to deliver such a nuanced and highly emotional turn is simply remarkable. Professional actors with years of experience would have a hard time dealing with the emotional roller coaster Horn must ride through most of the film, carrying it all on his shoulders. Though top-billed Hanks is mostly seen in a few flashbacks, his presence is felt throughout. Bullock is superb in her few scenes, particularly one in which Oskar tells her coldly he wished she had been the one who died. The veteran von Sydow is touching and memorable as a man of no words, but with a past that is revealed slowly with devastating impact. There are numerous others in the large cast that Oskar encounters on his journey, notably Viola Davis who makes the most of a couple of intense scenes, and Jeffrey Wright whose single extended scene opposite Oskar is a major highlight.

Eric Roth's smart adaptation of the book leaves much out by necessity, but gets the essence of Oskar's inner life brilliantly, although there is far too much voiceover by Horn when a little would have gone a long way. As he did in Billy Elliot, Daldry again proves to be a masterful director of children. The proof is there with Horn's impeccable work. Also of note is Alexandre Desplat's spare but touching score, and fine cinematography from Chris Menges.