close
Mission: Much More than “Acceptable” 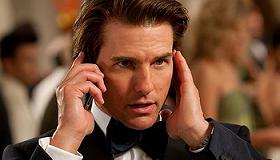 Shot in eye-widening IMAX, Mission: Impossible - Ghost Protocol (hereafter Mission: Impossible 4 for sanity's sake) marks an impressive live-action debut for Brad Bird, who previously directed animated instant classics like The Iron Giant and The Incredibles. Tom Cruise stars as the head of a crew of off-the-map ultra-secret agents (newcomers Paula Patton and Jeremy Renner and a returning Simon Pegg) out to stop a nutbar with nukes and save the name of the Impossible Missions Force. Like a shark slipping by swift, sleek and silver-grey, Mission: Impossible 4 is so well-made and smooth you may need to see it more than once to truly appreciate its brains and nerves and blood. With Cruise's star power—and a word-of-mouth "Wow!" factor that will make paying the IMAX premium less painful—Mission: Impossible 4 will earn more than enough rock-'em, sock-em let-me-entertain-you goodwill (and money, of course) to keep the fuse lit on this 15-year running franchise, now under the steady hand of producer J. J. Abrams.

If one thing elevates Mission: Impossible 4's script (written by TV veterans and Abrams-collaborators Josh Applebaum and André Nemec) it's not the action or the set pieces—it's the character moments and swift sense of humor. The Abrams-directed Mission: Impossible 3 was essentially and entertainingly a series of events that did not go as planned for Cruise's super-spy Ethan Hunt. Mission: Impossible 4 continues that theme and tone—the Ian Fleming gadgets and John le Carre globe-trotting—and combines them with a weary, workplace sense of humor that wouldn't be out of place on The Office. That is, if Michael Scott and his co-workers were a) good at their jobs and b) if their jobs involved shooting people.

Bird puts his animator's sense of timing to good use. An opening jail break scored to Dean Martin's "Ain't that a Kick in the Head?" is Pixar-worthy clockwork punctuated with PG-13 headbutts and truncheon-swings. The plate-spinning of the script is fun enough, even if it often feels like a long, large, loud version of the grade school problem about the small boat, the river and the man with the fox, the chicken and the bag of wheat. The bad guy (Michel Nykvist of the original Dragon Tattoo films) is an ex-nuclear war games nerd who wants to quit playing at atomic destruction. He's underwritten, but that doesn't mean he can't lead Cruise and co. on a merry chase as he seeks to unite a launch device, the launch codes and a suitable satellite to start World War II as a hobby.

You're occasionally acutely aware of watching Cruise and not his character—"Isn't it awesome Tom Cruise did his own stunts, as we've been told, and climbed the tallest building in the world?"—but outside of those a-star-is-reborn moments, Cruise meshes nicely with his cast. Pegg's tech-head Benji is back, but now away from a desk and out in the world ("I passed the field agent exam-crazy, huh?" Pegg notes early on), while Patton and Renner's handsome, hard-core thinkers-and-fighters bring their own emotional baggage to the job.

Many of the high-tech gadgets are just big, bold versions of the latex-mask and mirrors-on-poles from the original '60s TV show—and they're often broken or badly-used, which feels less like the contortions of a screenwriting team trying to artificially juice the tension on-screen and more like the way things are. (Anyone who's ever tried to clear a paper jam in the office printer will sympathize with more than a few moments here—again, especially if someone were shooting at you while you tried to dislodge it.)

The stunts and action are so smooth and big and superb that I immediately wanted to watch again, soothed and stabilized from the visceral engagement of the moment, to see exactly how they pulled them off. Cinematographer Robert Elswit, who found the meat and muscle in the look of films from Boogie Nights to There Will Be Blood, does an excellent job. So does stunt coordinator Gregg Smrz, who brought a similar flair to the stuntmaster's task in the unfairly overlooked Knight and Day. Better yet, Bird keeps Elswit's eyes and Smrz's agility working together-the action leaks into the moments of calm and vice-versa without that jarring sense of dislocation other big films have when they jump to the stunt-and-special effect stuff.

In his first live-action film, Bird gives us a cleaner, clearer, smarter and better action film than Michael Bay has in any of his nine straining, slapdash efforts. I wasn't blasted into the back of my seat cushions or dragged to the edge of my seat, but there were moments of adrenaline, laughter and suspense with enough character details to like these people being buffeted and blasted by bombs and bullets. Alongside Fast Five, Mission: Impossible 4 stands as one of the big-studio highlights of the year—it's smart, snappy and stylish fun just in time for the holiday.