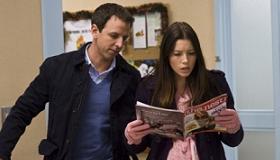 After last year's Valentine's Day scored over $100 million at the domestic box office it's certainly no wonder director Garry Marshall, New Line and Warner Bros. would want to tap the holiday well once again. With New Year's Eve, Marshall and returning screenwriter Katherine Fugate return to their the all-star, multi-storyline formula about the trials, tribulations, dreams and romances of a number of people just as the year is about to turn. But this time, the filmmakers get diminishing returns this time—many of the individual segments are too mundane, contrived and bland even for an episode of The Love Boat. Even with a big name cast that includes three Oscar winners—Halle Berry, Robert De Niro and Hilary Swank—New Year's Eve is at best a pleasant diversion that may not generate much box office interest given its killer end-of-year competition. Expect decent initial results followed by a quick exit from theaters shortly after that ball drops in Times Square.

Without much imagination or innovation, this strictly by-the-numbers affair zigzags between a number of disparate episodes without ever getting below the surface of any of the stereotypical situations set up by Fugate's uninspired script. The film begins by introducing us to Times Square development project VP (Swank) who is responsible for making sure everything goes smoothly with the annual Ball drop. (Of course, it doesn't.) Then it's off to vignette land. We meet loyal, but frustrated secretary Ingrid (Michelle Pfeiffer) who makes a bucket list of things to do before midnight, aided by a nice messenger boy (Zac Efron) willing to help her reach her dreams. There's Stan (De Niro), a dying man sharing his last moments with a sympathetic nurse (Berry). There's Tess (Jessica Biel) and Griffin (Seth Myers) and Grace (Sarah Paulson) and James (Til Schweiger), two couples racing to see who can deliver their baby closest to midnight in order to win a cash reward. There's Laura (Katherine Heigl), a caterer running smack into her ex, a musician named Jensen (Jon Bon Jovi) playing at Times Square, plus Jenson's backup singer (Lea Michele) who gets stuck in an elevator with the looney Randy (Ashton Kutcher). Oh, and there's an overprotective mother (Sarah Jessica Parker) trying to keep her boy-crazy daughter's (Abigail Breslin) hormonal balance in check.

None of these scenarios amount to much, but some of the actors justify their paycheck by making up with charm what their characters lack in credibility. Faring best are Pfeiffer and Efron who give their all to a silly plotline, particularly in a Radio City Music Hall sequence where Pfeiffer soars above the empty theater like Peter Pan. Biel—who along with Kutcher and Marshall regular Hector Elizondo is a veteran of Valentine's Day—also has a few choice moments, as do Swank and Josh Duhamel, who plays a spoiled rich boy suddenly looking to do something real with his life. Glee's Michele and Bon Jovi provide some nice musical moments and even Ryan Seacrest shows up in this thing, playing, of course, himself "Mr. New Year's Eve." But the best bits are saved for a loony gag reel during the ending credits—in this two-hour long "party," it's really the only scene that pops like a champagne cork.