close
The lump of coal in our Christimas stocking 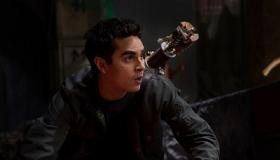 Traditionally, the cinema's terrors are most effective when they're only partially visible; this is why Jaws petrifies audiences to this day, while Deep Blue Sea is largely remembered for that part where LL Cool J monologues to a parrot. It's also probably why Chris Gorak thought it might be a good idea to make the aliens in his insufferably limp invasion flick The Darkest Hour completely invisible. Like an insidious cross between Eurotrip and Skyline, Gorak's second feature—unceremoniously dumped into theaters on Christmas morning as if to punish us our sins—follows two American bros as they travel to Moscow to pitch their social media upstart (an app that finally combines the fun of Four Square with the perils of date rape). They encounter two girls in a nightclub and seem on their way to a night of hedonistic bliss when they get totally cock-blocked by an alien apocalypse. Major bummer. The gang spends the next few days trying to escape an impressively desolate Moscow, but the film's convincing post-apocalyptic visuals and impressive feats of crowd control are muted by a dull grey sheen, turgidly useless 3D and the worst special effects to hit theaters since Lawnmower Man (by which I mean to say that they're worse than those in Lawnmower Man 2: Beyond Cyberspace). Abandoned in a massive glut of worthy films and without sufficient star power to continue luring in wayward audiences beyond its half-respectable holiday haul, The Darkest Hour isn't just a dark horse contender for the year's biggest joke, it's the darkest.

We meet Sean (Emile Hirsch as "The Rebel") and Ben (Max Minghella as "The Lame Responsible One") as they fly through turbulence on their way to Russia, involved in a timely conversation about the apocryphal perils of using a cellphone mid-flight—their conversation, of course, is interrupted by a temporary loss of power in the cabin. It's a unique scene, in that it's the only moment of the film during which we're glad these characters are alive. They land in Moscow, take in the sights (Gorak's travelogue images of contemporary Russia are somewhat invigorating), and hit up their meeting, which has been hijacked by a sleazy rival named Skyler (The Killing's Joel Kinnaman, whose greased yellow ponytail is tragically not the ugliest thing in the film). Sean and Ben hit up a nightspot to drink away their woes, where they encounter Natalie (Olivia Thirlby as "The Sensitive Chick") and Anne (Rachael Taylor as "Tall Blonde Alien Meat"). Oh, and there's Skyler! What are the odds?

A loss of electricity ends the night early and sends the partiers outside, where the crowd has a front-row seat for a resplendent shower of yellow lights. It's all fun and games until a cop gets a wee bit too close to one of the shimmering objects and disintegrates. Cue the panic, as a mess of half-naked young people stampede in every direction, Gorak's camera capturing the chaos with a sequence of flat medium shots that are almost as visually uninteresting as the aliens, themselves—so far as War of the Worlds riffs go, the radio version was more fun to watch. Once you've seen one person get disintegrated into a plume of gray dust, you've seen them all, and after Gorak's opening salvo of murders, you've almost literally seen them all.

Our heroes hide out in a kitchen for a few days (the aliens have the technology required for intergalactic travel, but are apparently still stymied by the infinite mysteries of a doorknob), and then emerge onto the deserted Moscow streets, eventually hoping to find safety aboard a nuclear submarine. The extent to which the production was able to clear the Russian capital of people is impressive, but Gorak makes meager use of the world he creates, and each of The Darkest Hour's minor aesthetic victories is ultimately just a painful reminder of the film's robust $50 million budget, and how woefully that money was misspent.

Certainly, invisible aliens couldn't have been much of a financial strain. "Oh no, how are we ever going to afford the 150 invisible aliens we need for this scene!? ...Oh, wait, never mind." But no scene in The Darkest Hour involves more than 3 aliens at any given time, which suggests that the film's overriding problem isn't that its baddies are invisible, but rather that its director had a complete lack of vision. The aliens—cloaked in lethal wavelengths of energy, or something—turn on every light they float by, but are never even remotely illuminating. Even the pitiable Skyline managed to lazily conflate the tactics of its extraterrestrial invaders with our modern subservience to the soul-sucking thrall of lights and sounds, but in <em>The Darkest Hour</em. everything just seems arbitrary, including the Russian backdrop. A commentary on the evolving dynamic between the people of Russia and the United States? A scene in which the American quartet is meaningfully dislocated by a culture crisis wrapped inside of a global one? Ha! All the film can manage is a cheap crack about Russian laws (“<em>What</em> Russian laws!”) and a flagrant waste of some obviously talented local actors.

As for the more recognizable faces, well, when Emile Hirsch deserves better, you know things are grim. He's got the most to do, and he, uh, definitely does it. Minghella is half-asleep, but Thirlby and Kinnaman both elevate this dreck as best they can, she with wide-eyed charm and he with the same slimy pluck that makes his AMC show watchable. But thanks to the horrifically dark 3D (the darkest?) the actors are almost as difficult to see as the aliens, and when you finally do see the aliens, you'll wish the 3D had been darker (imagine Toothless from How to Train Your Dragon, but not as real). Of course, the 3D effect is almost exclusively deployed to sprinkle the dust of human remains onto the audience, which is just such a charming use of the technology. The overwhelmingly buoyant joys of Hugo have nothing on this. Of course, had Georges Méliès anticipated The Darkest Hour, he would have destroyed his studio himself.