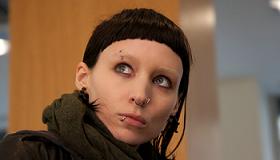 When word Steig Larsson's best-seller-turned-blockbuster was being remade for American audiences by darkness-loving director David Fincher, it looked like paint-by-numbers casting and a dream come true. The Swedish story of hard-luck, hard-as-nails Lisbeth Salander (Rooney Mara, perfect and severe) earns its black stripes with plenty of anti-social intrigue and cruelty to humans (and smaller creatures). You'll be happier with the film if you don't expect fidelity to source material, but that doesn't mean you'll hate it if you loved Niels Arden Oplev's movie. Regardless, it'll make money hand over fist, and I'd love to know how many people buy their tickets with their Visa Black Cards.

You can't have a rape-revenge flick without showing rape, and the baddies in this film all uphold that questionable European worldliness that smack in the middle of smarm and charm, which makes the rape seem less like a violent act and more like perversion. Fincher makes evildoers look like well-heeled gods and makes dissenters look like the voices of truth. With the chilly, muscular exterior you've come to expect from the man who made Zodiac and Fight Club, this justice-driven import/export is less sexually explicit than the Swedish version (no surprises there), but more conclusive about the characters' relationships.

A computer hacker of uncanny skill, Lisbeth Salander's just done a comprehensive report on journalist Mikael Blomkvist (a steamy Daniel Craig), now under investigation for libel. His reputation undone, Blomkvist takes a strange offer to pen a biography about Swedish railway magnate Henrik Vanger (Christopher Plummer), a kind patriarch in a family of Nazis, vultures, corporate criminals and deserters—as they had all this money (and their own island), no one ever really called them on their crap. Sequestered to a worn white cabin amidst the seperate mansions of remaining relatives, Blomkvist snuggles up to the Vanger clan from his version of Siberia. Meanwhile, Salander is terrorized by her social worker, a patrician-looking guy who first seems interested in playing daddy but abruptly forces her into very non-consensual sexual favors. As she can't access her own money, she's stuck servicing him, until she gains the upper hand (magnificently so). Blomkvist eventually commissions her to help him investigate the disappearence of Vanger's teen niece back in 1965. Lisbeth, whose life has been upended by brutality towards her womanhood, takes the investigation personally. If only Fincher followed suit.

The opening credits are a gorgeous music video made for a darkened theater: black liquid drips into morphing shapes, flowers and faces emerge, scream or fuse or kiss or contort or shatter. It's fascinating, depriving and just distant enough you never quite care. The hollow sound mix replicates hearing through glass or over a distance—this is a pretty display you're never meant to invest in. Dragon Tattoo isn't the tortured Fincher of Fight Club, or the fleshy cynic of Se7en, or even the power-seeker of Aliens 3. This Fincher is precise about his surfaces, but tiring of them. That he apes prefab goth-appeal (which was somewhat out-of-a-box to begin with) must have something to do with the prives his dispassion. It's masterful, dark magic without any release, and a retribution film that argues revenge can't undo harm—we always bear scars (or tattoos) to report our histories. But for a story literally about a woman who wears a map of suffering on her skin, I could have used more sense and a lot more sensitivity.

I resent not feeling any of that depth, especially knowing I was never meant to. I won't call it exploitation—it's too reserved—but I don't value the slithering beauty of all this suffering.