close
This Iron Lady is in softer circumstances 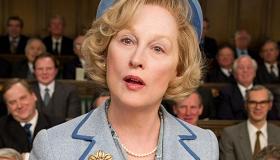 Meryl Streep shines in Phyllida Lloyd's ostensible biopic of former British Prime Minister Margaret Thatcher. Playing the titular hard-as-nails politician nearing the end of her life, Streep turns in her requisite bid for end-of-the-year awards recognition. But where the actress succeeds, all but disappearing into the role of Thatcher, the rest of the film is a bizarre amalgamation of archival footage, half-baked montages, hallucinations that push the bounds of poetic license straight into the gray area of bad taste, and plain old tedium. A crowded post-holiday box office, complete with Christmas holdovers and the opening of two other buzzed-about awards titles (A Separation and Pariah), paired with little of its own pre-release chatter, will likely result in a soft opening for The Iron Lady. Hardcore Streep fans and bored history buffs will turn out, but the film is not likely to gain much traction from them.

The Iron Lady supposes to take on a year of Thatcher's life—the year after the loss of her husband (played to the hilt by Jim Broadbent) and an uptick in worldwide political turmoil. Though that's a nifty (and honestly, sort of cheap) conceit, the film actually covers much more, routinely slipping between time and place in ways that feel elementary but not particularly interesting, accomplished or original. The film roots itself in Thatcher's life post-political career, but it frequently skips through the big moments like a sort of paint-by-the-numbers timeline; it's speedy and zippy and lacks gravitas or meaning. It's a bit like a highlight reel interspersed with cheap shots, like a newly-elected Margaret leaving for her first day at Parliament as her young twins hang on her car doors and beg her not to go.

We also get to know the young, determined Margaret (Alexandra Roach) by way of some Dutch-angled, fuzzy-edged memories that roll by much too quickly to grab hold of the audience. Studious Margaret is maligned and misunderstood, even when she lands at Oxford, and again when she embarks on her political career. The only person who seems to believe in her is Denis Thatcher (played in younger years by Harry Lloyd). Even after Denis proposes to Margaret, she begs him to understand her and her desires when they come to domestic duties, barking without much fire, "I cannot die washing up a tea cup! I mean it!" It's hard to imagine the real "Iron Lady" having to back up such a statement with a squeaky "I mean it!," but that's the world presented by Lloyd and screenwriter Abi Morgan.

But, of course, we're meant to understand that this is all coming to us by way of Margaret's memory, the unstable memory of someone in rapid decline, prone to hallucinations and over-the-top outbursts. The film is not especially original or adept at presenting Lloyd and Morgan's vision of a crumbling Thatcher. We get that she's disconnected from the present by the vague look she gives when one of her assistants' cell phone rings with a clubby tune serving as ringtone. She doesn't remember things and frequently has the glazed over look that signals brain waves are slowing or slipping. She's even a bit slurry when she vaguely demands of no one in particular that "we must never, ever, ever give in to terrorists!" It would be a poignant moment—the removed leader, shouting out proclamations in her living room, though no one asked—the sort of thing that The Iron Lady should feature much more of, but it's a too-brief bit to which Lloyd and Morgan don't return.

The film is scripted by rising star Abi Morgan, who also wrote this year's excellent Shame, a truly moving and bold character study, whose script likely benefitted from a co-writer credit for director Steve McQueen. There's no such similar help here, and Morgan has penned an overstuffed and dreary project with The Iron Lady. But certainly, some of those issues must rest with the film's somewhat green director—Phyllida Lloyd cut her teeth directing stage plays and operas, and The Iron Lady is only her third feature (aside from a television movie back in 2000). She's best known for her first pairing with Streep in 2008's Mamma Mia!, and all the theatrics of that outing are still present here—but these are "theatrics" in the worst sense of the word: motions that are over-the-top and exaggerated and quite removed from reality.

As an intimate portrait of an elderly woman crumbling into dementia, The Iron Lady often works remarkably well. As a vehicle for Meryl Streep who uses her immense talent to slip into a well-known person, The Iron Lady again works remarkably well. But a deep or satisfying cohesion between those two aims never comes together; leaving behind a jolting, hysterical film that's both over-directed and underdeveloped, no matter how talented and dedicated its star is to the endeavor.