close
How did mayhem get so boring? 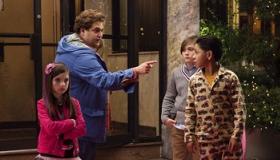 David Gordon Green's latest comic foray mixes traditional comedy tropes—a fish out of water, a mismatched group of characters thrown together with a common goal, a series of misunderstandings and mistakes, Sam Rockwell selling illicit drugs in dinosaur eggs—in hopes of baking up something new. The Sitter stars Jonah Hill as wayward college drop-out Noah, tasked with watching three kids of varying degree of latent insanity for just one night, a premise that goes predictably awry when his shrill "girlfriend" (Ari Graynor) demands he bring her some of those egg-ensconced drugs. Noah and his charges embark on a wacky night of misadventures, none of which feel or look original or exuberant in the slightest, making the ostensible comedy a snooze and a bore. The Sitter will likely do the same middling box office business to Green's other 2011 comedy, Your Highness, pulling in a young-skewing audience to land somewhere in the middle of the top ten on its opening weekend before falling off due to poor word-of-mouth.

Plot sound familiar? The film's premise bears more than just a passing resemblance to nostalgic ‘80s favorites like Adventures in Babysitting or Uncle Buck, and is packed with a number of ‘80s-esque plot lines and characters that, more often than not, land on the side of just plain bizarre. Noah and the kids have a number of run-ins with an unhinged coke dealer (Sam Rockwell) who leads a band of ‘roided out and Spandex-ed up bodybuilders, along with a personal assistant whose primary mode of transportation is roller skates, kitted out with tiny denim shorts and old school headphones. The film even comes with a synthesizer-heavy score that, occasionally and jarringly enough, sounds a bit like what composers Jeff McIlwain and David Wingo (who are, like most everyone else in the film's cast and crew, better than this) remember the score from Risky Business sounding like. Even the secondary villain in the film, Graynor's ex-boyfriend, looks like he wandered off the set of a Karate Kid knock-off (not even one of the originals)—his name is the perfect ‘80s villain moniker "Ricky Fontaine," and he's, get this, a kickboxer. It's still not the sport of the future.

But The Sitter's affection for (copying of) ‘80s films isn't complete enough to be an homage—particularly because the film doesn't commit fully to the past. The film feels as if it was yanked out of 1984 and spiced up with some modern signifier. Among the random nods to current culture are a gag that reeks of My Super Sweet 16, a bizarre bit about Facebook, essential plot elements that revolve around a familiarity with celebutants like the Kardashians, and an importance placed on cell phones that's just about the only piece of the film that feels even remotely rooted in reality.

The film is the feature debut of screenwriters Brian Gatewood and Alessandra Tanaka, whose lackluster script essentially negates the talent of everyone involved. Noah may be our lead, but his character is filled out in a scattershot manner: we know he's into astronomy (because we're reminded of it at least five times), we know his dad is a deadbeat (because we meet him, too), and we know he's had a bad run of things (the reason behind this one, well, we'll never quite know, but he's certainly been arrested a lot!). Graynor's Marisa is void of any humanizing characteristics, Sam Rockwell's coke dealer Karl is only interesting because of Rockwell's balls-out performance, and the kids (Max Records, Landry Bender and Kevin Hernandez) are comprised almost totally of stereotypes.

The Sitter clocks in at a slim 81 minutes, but it feels significantly longer, as there is almost no fluidity between scenes, with the entire outing feeling slapped together at the last minute. Films like The Sitter hinge on time constraints ("Gotta get home before Mom and Dad do, at 1 A.M., a set time we've been reminded of almost non-stop!"), but little attention is paid to actually keeping things ticking along. At one point, Noah declares that he and his merry band of misfits only have 30 minutes to accomplish a litany of tasks, a demand that seems unfeasible at the time, though no matter, as even the film's actual runtime from that point exceeds 30 minutes.

Green is an immensely talented director, and his early finely tuned dramas make it almost impossible to believe that he's the same director who made The Sitter. But after a run of impressive and beautiful films (including his debut George Washington, All the Real Girls, and Snow Angels), Green has redirected his gaze to more mainstream comedies. He hit gold with Pineapple Express (a buddy comedy stoner flick that remains hilarious and just the right amount of twisted), before turning in his last two laffers: Your Highness and The Sitter. Your Highness felt a bit like a trick played by Green and his pals on Hollywood, a film made because they thought it was funny and because Green had the clout to make it after the success of Pineapple Express. But while Your Highness didn't have the same mass appeal as Pineapple Express, over time it will likely grow into a cult hit. The same cannot be said for The Sitter and for one essential reason: The Sitter is not funny. It's not only not funny, it's slack, derivative, lazy, embarrassing and boring. David Gordon Green is my favorite filmmaker of his generation, but The Sitter is one of the worst films of the year.