close
After Bond, but before Bourne—the real deal 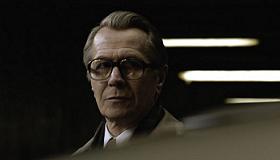 Violent, yet devoid of the amphibious cars of the Bond series or the shaky-cam "realism" of the Bourne films, Tinker, Tailor, Soldier, Spy will face a tough time at the box office. It shouldn't. It's a Cold War-era tale, one that plays out in moral shades of gray, where the broad and brilliant cast engage each other with a series of smiling lies, whispered facts and silent nods of the head. The time is 1973, the clothes are mostly brown and your friends are occasionally your enemies and your enemies occasionally have to be admired. Directed by Thomas Alfredsson—whose breakout film Let the Right One In was another retro fable about secrets and power punctuated by drops of blood—Tinker Tailor Soldier Spy is the intellectual action flick of your dreams. It combines the fine acting and craftsmanship of the inert, dusty films that have been taxidermied into the dead pose of Oscar contenders with the brisk, bloody visceral appeal of a thriller (without the computer-generated imagery and computer-generated idiocy that so often makes those films a chore). In short, it is the ideal holiday film for grown-ups.

Tinker, Tailor, Soldier, Spy plays out under slate-gray skies or in the dead of night. An operation in Bulgaria has gone horribly wrong. With an agent shot, the fallout sees Control (John Hurt) the head of British Intelligence, resign in shame and take his top man George Smiley (Gary Oldman) with him. But a year later, Undersecretary Lacon (Simon McBurney) calls Smiley back. Control is dead, and a field agent has reason to believe that the eternal rumors of a long-standing Soviet mole at the top of British intelligence are in fact true. In fact, as Smiley discovers, Control already had a list of suspects that includes the five most important men in British Intelligence: Percy Alleline (Toby Jones), Bill Haydon (Colin Firth), Roy Bland (Ciarán Hinds), Toby Esterhase (David Dencik) and...Smiley himself.

And so Smiley tries to discover a secret while staying secret among a network of cut-out men and killers, field agents and desk officers. Smiley soon takes on rough and ready Ricki Tarr (Tom Hardy) and the smooth and civil Peter Guillam (Benedict Cumberbatch) as his right-hand men while he pokes and prods at a web of lies to see who spun it, with the dangerous possibility that the betrayer might be a friend. The excellent and fairly self-evident news is that these talented actors could be fascinating even if merely placed in front of a white wall to read the phone book. The better and immediately evident news is that they've got better lines to chew. While the script adaptation (by Peter Straughan and the late Bridget O'Connor) occasionally feels rushed or cramped in places—le Carre was a real-life field-work intelligence agent at the height of the Cold War and littered his work with details and digressions—a theatrical film simply can't squeeze in as much as Alec Guinness' 1979 TV Tinker, Tailor miniseries, a five and a half hour achievement. Still, even trimmed it's also as finely-tuned and subtle as one could ask for, although the film's central emotional relationship—which matters in the bloody endgame—gets remarkably short shrift. It's a minor flaw, but a real one.

The performances are also all excellent. Mark Strong plays Jim Prideaux, the agent whose miserably-failed Bulgarian mission starts the film. He's excellent as a warrior haunted by the wounds he received and gave in the past. The interplay and contrast between Hardy and Cumberbatch is rousing stuff. And the four possible moles—Hinds, Firth, Young and Dencik—build small moments into large fields of possibility. But Oldman excels. Aged, straight-backed, stiff-lipped, he only raises his voice once, and it's fascinating to see how Oldman and Alfredson convey intelligence and awareness on-screen. Instead of fistfights and gun battles, we get contemplation and realization—equally powerful stuff.

The technical work on-screen is astonishing: subtle sound editing, organic set design and dressing, excellent lighting, and cinematography that captures the portent in the smallest tilt of a head. Alfredson captures spy work not as we wish it was but, rather, as it is: work like any other, full of professional fallibilities and office flirtations (a repeated flashback to a British Intelligence Christmas party is both hilarious and important). Is it comforting or terrifying to know that the people who ostensibly keep us safe are humans who make mistakes? A sequel, Smiley's People, has already been announced, but even in and of itself, Tinker, Tailor, Soldier, Spy is a film to savor, flaws and all. It's the rare thriller that doesn't stop every few steps to make sure you're following its plot and exposition but instead rushes into the night, expecting you to keep up the pace as if your life depended on it. Thrilling, incandescently intelligent and superbly made, Tinker, Tailor, Soldier, Spy makes the past come alive with both the hot passion of feeling and the cold intelligence of genius.