We Need to Talk About Kevin 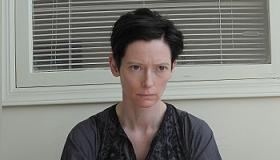 Lynne Ramsay's (Morvern Callar) first narrative feature in nine years is uncomfortably tense but worth savoring, particularly because of Tilda Swinton's devastating lead performance. With the compelling story of a couple whose lives are destroyed by the horrific actions of their son, Ramsay delivers a forceful saga that may be too much for many audiences but will certainly cause talk and make an impact at awards time. The 2011 Cannes competition entry has just been acquired by Oscilloscope and will be positioned for late fall release and an Oscar run. Box office prospects could depend on strong critical support and year end honors in order to overcome the downer subject matter.

Ramsay and Rory Stewart Kinnear adapted Lionel Shriver's chilling novel and brought the force of the story to vivid life; a series of flashbacks, flash forwards and present day encounters paint the portrait of an unhinged child and a loving mother completely unprepared for the rigors of parenthood. Eva (Swinton) and her husband Franklin (John C. Reilly) leave their posh Manhattan life for the suburbs to bring up their son Kevin (played by Rocky Duer as a 6 year old, Jasper Newell in the middle years and Ezra Miller as a teen). However Kevin is no walk in the park. His initial silence is once confused for autism but Eva's worries come from his outbursts and increasingly eerie behavior. While Franklin is clueless and dotes on him, Eva has severe problems coping with the kid and often expresses a desire to run back to her old life. Is Kevin an Omen-like devil child, or are Eva's questionable parenting skills responsible for creating the little terror?

Ramsay's shot this intimate story (ironically) in big screen Cinemascope, which is nothing short of stunning. She turns the film into a puzzle, slowly revealing that Kevin is heading into Columbine territory, hinting throughout at his involvement in some unexplained but ominously horrible event at his high school. Ramsay builds suspense and keeps the audience riveted by not giving too much away and letting characters develop. Swinton's Eva is one of the most complex and intriguing portraits of parenthood ever put onscreen and the actress pulls it off with minimal dialogue, letting her facial expressions tell the tale. A scene where she impulsively throws Kevin against the wall and later attempts to apologize is immensely powerful in its impact and truth. Performances don't get better than this. Reilly is a nice counterpoint as the dad but you just keep hoping the guy will get a clue about his son before it's too late. Casting of the Kevins is superb; all three actors look like they could be brothers and the hand-off is effortless, particularly considering Ramsay's cutting techniques. Ashley Gerasimovich as Kevin's younger sister does nicely too.

Although the film is hard to stomach and provides more questions than answers, it's a rewarding cinematic experience, challenging filmgoers and providing Swinton with another brilliant and unforgettable screen role.