close
Put our 3D to the test

Beauty and the Beast 3D 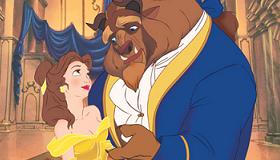 Still indisputably superlative, Beauty and the Beast joins The Lion King as the latest animated classic to be converted into 3D and gains little in the process. Disney spared no expense giving the film a new dimension, but it's so familiar, beloved—and most importantly, effective—in 2D that no augmentation is necessary. But given The Lion King's considerable haul upon its rerelease, Beauty and the Beast seems destined to enjoy similar returns in theaters, even if its technical bonafides aren't as impressive.

It's redundant to revisit the film's plot, but the remarkable thing about the story is how fresh and interesting it still feels. As Disney heroines go, Belle was an iconoclast. Her strong-willed, independent personality feels invigorating in a medium where most damsels are in distress. That was definitely true 20 years ago when Beauty was released, and it's still half-true today—hopefully Pixar's warrior girl flick Brave will change that. The rapport Belle slowly develops with Beast feels natural and unforced, and gives the film the kind of emotional resonance that deservedly earned it a Best Picture nomination at the Oscars, the first animated film to receive that honor in the history of the Academy.

But the 3D adds little to the film's art. There are a handful of shots, like the scene when Belle explores Beast's cavernous castle, where the new dimension really stands out, but otherwise, most of the added depth is either unnoticeable or irrelevant. Even the cups, plates and furniture that make up Beast's staff of servants still look one-dimensional. But the times when the animators use computer animation to render the backgrounds—the dance sequence between Belle and Beast, the "Be Our Guest" musical number—are effective, immersive and maybe even memorable 3D. Beauty and the Beast was actually converted into 3D before to The Lion King, and it shows. Disney's second go at it solved the main problem that we see here: a pop-up book feeling where the 3D just isn't emphatic enough. But simply having any opportunity to see the film on the big screen is enough for most fans of the film. Of course, if you have a 3D Blu-ray player, the film has been available since October for home viewing—and that set comes with 2- and 3D versions. Beauty and the Beast looks beautiful and is sure to entertain, but this experience is superfluous at best—it was already a three-dimensional story long before these new technics.