close
Not just another story about warring Talmudic scholars 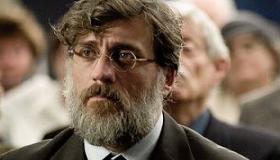 Joseph Cedar's Footnote is a wry, wise little film that revels in the cataclysmic import of a life's most ostensibly trivial details. With the acerbic flair of the Coen brothers and a command of montage that recalls early documentaries by Errol Morris, Footnote zigzags around severe Eliezer (Shlomo Bar Aba) and his gregarious son Uriel (Lior Ashkenazi), two philologists of diametrically opposed persuasions whose strained relationship risks being torn apart completely when Eliezer is awarded the prize he's lusted for since he devoted his life to Jewish lore. But Eliezer award was a mistake—it was intended for his son. Sony Pictures Classics knows they've got a hard sell on their hands (even the press notes are compelled to include a brief description of Talmudic literature) but strong reviews and a potential Academy Award nomination for Best Foreign Language Film (Footnote is Israel's official submission) could make this something of a small sensation amongst discerning older audiences.

Footnote begins with the text: "The worst day of Eliezer Shkolnik's life," making for as droll an introduction to a protagonist as you're likely to see, and one steeped in a rich and immediately recognizable tradition of self-diagnosed "tsuris." The film's first images are recognizably rooted in the present day—finding Eliezer in his office, surrounded by his books—but their tone recalls the wistful anguish of Fiddler on the Roof's beleaguered Tevye, establishing a tenuous bridge between an unformed modern world and the echoes of the ethics which continue to inform it.

Eliezer is a crumbling statue of a man; his face is creased with decades of disappointment, and Cedar's camera is determined to excavate every one of them. At the ceremonial event he attends on the night of his worst day, Eliezer's son delivers a glowing speech in his honor, but during the standing ovation it incites, Cedar just hangs on the old philologist's cantankerous face, so calcified into an empty bitter scowl he resembles an extra from Awakenings. There's no coming back from being this defeated—his face could hush the Wailing Wall.

And then there's Uriel, Eliezer's son, a Hebrew Alfred Molina with kind eyes, soft plump features, and kids who don't utterly loathe him. In contrast to his father, who has dedicated his entire life to a potentially game-changing sliver of esoteric Talmudic minutia, Uriel is sort of like the Us Weekly of Jewish folklore. He writes hugely popular books about the love lives of the Old Testament's most salacious figures and the people eat it up. By the time we meet Eliezer and Uriel, they're relationship has deteriorated into the sort of value-based rivalry shared between Albert Brooks and William Hurt in Broadcast News.

Of course, the dynamic between them is complicated to abstraction by the nuances of paternal pride. They can map the libido of any apocryphal religious figure, but even the broadest discussion of their feelings is impossible—they speak to each other only in nods and curt vanities, as if the slightest bit of validation might topple the balance of power and force them to interact as family rather than nemeses. Eliezer and Uriel are determined to earn the other's validation at all costs ("I'm an exemplary father" vs. "I'm a worthy son"), but they're so overwhelmed by their desires to be good relatives that they're in danger of becoming bad people.

That may sound didactic, but the genius of Cedar's film is that he understands how fatherhood is a tremendously common syndrome with infinite variations. The shorthand between Eliezer and Uriel is familiar, but the details are pointedly unique (an element accentuated by their specialized line-of-work). Smooth, swelling noir horns underscore their relationship with dangerous intrigue, while exposition dumps in the form of zippy slideshow presentations take a cue from Wes Anderson and illustrate the extent to which these men's lives take shape around their scholarly pursuits. Helped along by a battery of stellar performances, Footnote amounts to a remarkably lucid bit of dry drama, tripping up only when it strives to be parched.

Sure, the visual humor often feels a bit shoehorned, but the film's only big misstep is in the flippant observation that Eliezer may be adrift somewhere on the Autism spectrum, undiagnosed for all these years. The idea is presented in jest, but it clouds every moment that follows as evidence to its accuracy mounts. It's certainly plausible that Eliezer may have narrowly predated a society sensitive to such matters, but the notion cheaply and completely flips our regard for his relationship with Uriel on its ear, transforming him from pitiable dick into high-functioning hero in a single line, the implications of which in no way strengthen the film's core themes.

Fortunately, Cedar reserves his most assured storytelling for the last half-hour, selling this story with a virtuosic touch that distracts you from its clean three act structure and irons out the aforementioned kinks. Cedar indulges in a climactic montage that splices the feverish documentary truth-seeking of The Thin Blue Line with the dialectical force of Battleship Potemkin, rendering the crack of an open book as if it were the venue for a huge action set-piece—if Bryan Singer had these kind of chops, The Usual Suspects could have been a short film. The bravura sequence is made all the more impressive because it strives to crack a mystery, the answer to which the audience has been provided from the start. Families, Footnote argues, can't be solved, not by the brightest minds in the world. But perhaps with kindness, even of the most transparent sort, they can push forward.