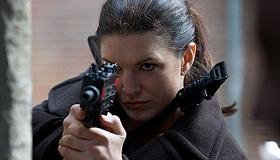 To date, Hollywood's attempts to bring Mixed Martial Arts to the big screen have been lukewarmly received by audiences. Perhaps it's the insistence on grounding plots in the world of MMA culture (Redbelt, Warrior) that's been a turnoff. Enter Haywire, which allows female MMA champ Gina Carano to show her stuff outside the ring in Steven Soderbergh's latest color-coded global romp: as in Traffic, Ocean's Twelve and Contagion, his dexterity in managing a chronologically tangled multi-city narrative makes for stylish fun. As private sector covert ops agent Mallory Kane, Carano handles herself adroitly in a standard-issue story that puts her on the run as she tries to figure out who's trying to kill her—and why—after a job gone wrong. Streamlined, beautifully shot and casually thrilling, Haywire's superior action fun should hopefully draw audiences eager for R-rated, no-frills fare.

Re-teaming with The Limey screenwriter Lem Dobbs, Soderbergh once again starts in the middle of his story, with Mallory meeting Aaron (Channing Tatum) in a diner. He's there to retrieve her, she doesn't buy his assurances of goodwill, a brutal fight follows, and Mallory flees with befuddled customer Scott (Michael Angarano). As they drive, she runs the stranger through what came before: the successful rescue of a Chinese dissident in Barcelona, a 48-hour Dublin mission with Paul (Michael Fassbender) that ends with him trying to kill her, and the killers she's had to elude before ending up in this car. As Mallory talks, she makes Scott memorize names and locations, asking him to recite them back in bullet-point shorthand—a wry acknowledgment of the story's perfunctory nature. What dialogue there is errs on the side of pulp quotability: "Watch your six," Mallory's ex-military, bestselling author dad (Bill Paxton) advises.

The very first shot—an out-of-focus blue blur panning down to a diner with the words Upstate New York in italics—is recognizable as a signature Soderbergh color-corrected image (as usual, the director served as his own DP under the pseudonym Peter Andrews), and the rest of the film bears his unmistakable visual flourishes. Like Ocean's Twelve, the director's own virtuosity is one of the foremost pleasures: whenever Carano isn't delivering impressive smack-downs in long takes whose authenticity is unquestionable, he keeps her on the run, finding unobtrusively skillful ways to frame the various locales. The results are non-stop: rooftop chases, shoot-outs, hotel room brawls and car chases, all of which are kept within the bounds of physical possibility (if not exactly probability), eschewing CGI, fiery explosions or sudden shock cuts.

Any complaints about the lack of room for empathy or emotional involvement are misguided: here, kinetics trump characterization. Politically, the film conceals its hand until late in the game: Mallory's military background (and her father's mustachioed presence) hint at anti-government, off-the-grid libertarian paranoia, but the final explanation of what's behind all the chaos is, to use current conservative vernacular, anti-job-creators. "I'm assuming the motives of everyone involved are strictly professional," asks Fassbender's Paul. "The motive is money," answers his contractor, "The motive is always money." Combine this with grumbling from government official Coblenz (Michael Douglas) about the private sector's combined unaccountability and inefficiency, and there's more than enough material here to inflame conservative websites. The critique's as laconically pungent as anything else in the film, but no matter: at heart, Haywire is about the simple joys of action film virtuosity, and Soderbergh delivers.