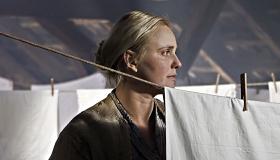 In 1943, a group of desperate Jews escaped the Nazi occupation of their Polish town by hiding in the dank and disgusting local sewers. They would not emerge for 14 months. The question of how they survived living in underground tunnels for over a year is answered in riveting fashion by director Agnieszka Holland, whose In Darkness is the latest in a career-spanning string of World War II successes that include Angry Harvest and Europa Europa. In choosing this particular Holocaust story, one might accuse Holland of signing up for an easy, if not downright opportunistic, task. The constant specter of discovery by the Nazis provides endless openings for screw-tightening tension and the Jews' only chance for survival is a Polish-Catholic thief and sewer worker whose actions echo those of Oskar Schindler, immortalized to worldwide acclaim by Steven Spielberg. Unlike that Hollywood sentimentalist, however, Holland rigorously avoids easy button-pushing in her dispassionate, grueling adaptation of Robert Marshall's book, "In the Sewers of Lvov." Such an approach makes Poland's official submission for the 2012 Best Foreign Language Film Oscar more than "just another Holocaust picture." On the contrary, In Darkness takes its place among the many great European films to tackle the subject. Plenty of quality-seeking adult moviegoers will be lured to the arthouse and thoroughly moved.

Whereas too many Holocaust dramas rely on built-in sympathies and long-settled historical assumptions, the Warsaw-born Holland is not afraid to trade a barely-earned tear for a surprising tweak of our expectations. Indeed, the movie's uniqueness and underlying power lies in its embracing of contradictions. The dozen or so Jews forced into the tunnels aren't the standard collection of quivering, sainted victims. When the Nazis lay final waste to their town of Lvov, Yanek (Marcin Bosak) chooses to escape to the sewers with his mistress instead of his wife and daughter. The group's handsome leader Mundek (Benno Fürmann) is an out-and-out conman and another is a drug addict. Their astonishing year-plus internment in such fetid, claustrophobic environs brings out the pettiness, impatience and, of course, resolve of nearly everyone. Above ground, their savior is, initially at least, hardly pedestal-worthy. Socha (Robert Wieckiewicz) is a city maintenance worker and burglar who "knows the sewers better than I know my own wife." His twisty, tubular subterranean workplace provides ample hiding spots for the loot that he and his partner Szczepek (Krzysztof Skonieczny) steal from the homes of Jews who have been killed or rousted into concentration camps. Stumbling upon the Semites fleeing to the sewers, Socha offers his assistance in exchange for cash. He'll earn more from these frightened, helpless Jews than he would from turning them over to the Nazis. "Yids" and a "bunch of lice," Socha says of the group, who discuss his offer by noting that one should "never trust a Polack."

These welcome shades of gray keep us on our toes and forestall any encroaching sense of Holocaust fatigue and thoughts that we've been to this heartbreaking dance too many times before. Holland's acknowledgement of human foibles and moral trajectories isn't even for show. It's the choice of a realist, a humanist and one of the better contemporary European directors. As the primary vessel for Holland's humanism, Socha transforms without capital letters or exclamation points. As he repeatedly descends into the cold and rancid depths with food and supplies, his mercenary motives evolve into straight altruism, partially thanks to his wife's reminder that Jesus himself was a Jew. Another motivating factor is the fear that Szczepek might sour on the deal and turn everyone in, meaning death for Socha and his charges. There's also the matter of keeping the truth from Socha's old friend Bortnik (Michal Zurawski), now supporting the Nazis in the Ukrainian army.

The film never really addresses the excruciating quotidian details of hygiene and health that would affect people living in a sewer for 14 months. Instead, Holland focuses on major turning points, including one woman's pregnancy and the risk taken by Mundek when he leaves the tunnels to sneak into the Janowska concentration camp to save a sewer-dweller's sister. It's a tribute to the film that these broad stroke story points feel less familiar in the hands of Holland and freshman screenwriter David F. Shamoon, working off Marshall's 1990 book. Special recognition goes to cinematographer Jolanta Dylewska and her fearless under-lighting of the subterranean tunnels and how they contrast with the bright, sometimes wintry, whites of the above ground world. The one contributor who would have earned an Oscar nod had the film been an American studio production is Robert Wieckiewicz. With his round face and Eastern European intensity, Wieckiewicz is pitch perfect as Socha, never courting audience gratitude and never devolving into a caricature of goodness and redemption. He combines a survivalist's tough-mindedness with just enough scrambling and quick thinking to suggest the ongoing difficulty of his task. Wieckiewicz commands the screen in a film of great power and depth, a testament to those human enough to be flawed and human enough to change. Yes, In Darkness is a Holocaust story and it contains much that we've come to expect. But the film's acknowledgement of our moral mutability elevates it above the normal WWII tale, while still reminding us that we all spend time in and out of the sewer.