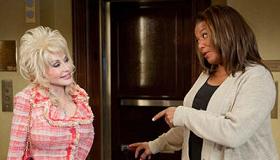 Playing more like the unfocused fever dream of gospel music addicts and Dolly Parton fanatics than an actual film, Todd Graff's Joyful Noise is a well-meaning production that consistently fails to deliver on even the most basic of cinematic expectations, all while covering up stunning ineptitude with bloated song-and-dance numbers. The film stars Parton and Queen Latifah as dueling church choir singers who come to blows (often literally) over who should lead their plucky pack of warblers to a national championship. But though Graff overstuffs a simple plotline with too many different stories and voices fighting to be heard, fans of gospel music and the film's two leading ladies should walk out of theater humming a delighted tune, despite the film's inability to function beyond its uplifting jams and over-the-top performances.

The film opens jarringly with a conflict and no context, a type of scene that plays over and over with slight variations throughout Joyful Noise's wholly unnecessary, nearly two-hour-long runtime. We're quickly introduced to choir master Bernard Sparrow (Kris Kristofferson, now leaving us to wonder how he was ever an actual recording artist), his classically-styled choir singing their lungs out at a church choir competition, and the two big-voiced ladies who seem set on outdoing each other at every turn. But the choir's chops aren't really at the center of this rapid opening—it's Bernard, clutching his left arm, and his own wife G.G. (Parton) escorting him off-stage while Vi Rose Hill (Queen Latifah) tries to keep the song alive. Bernard dies, but the choir wins. That sort of quick, unexpected, and needlessly dramatic turn of events defines the way Joyful Noise works, which is to say, not very well.

Joyful Noise is loosely set up as a standard "big competition" film, with its gang of misfits battling all sorts of obstacles to get to the final show to prove their worth (it's, weirdly enough, very similar to Bring It On). But while that's a simple enough plot to follow, writer and director Todd Graff is clearly from the "more is more" school of cinema—he piles on plot point after plot point and so overstuffs Joyful Noise that the extra problems prove boring, not compelling. Among the things that G.G., Vi Rose, and the choir need to overcome are the appearance of G.G.'s grandson Randy (newcomer Jeremy Jordan) who is interested in helping out the choir but more interested in Vi Rose's talented daughter Olivia (Keke Palmer), the crumbling of Vi Rose's marriage, town-wide poverty (here, closed businesses post signs that literally read "Times Are Tough"), a choir member looking for love in all the wrong places, the death of yet another choir member and Vi Rose's son's Asperger's Syndrome and its effects on his social life. And that's just a taste of Joyful Noise's soap opera sampler.

Graff penned a number of projects (including forgotten stuff like Angie and The Vanishing) before settling on his presumed sweet spot-musically-tinged projects that don't seem to be in high demand by most audiences. Joyful Noise is his third following Camp and Bandslam, but he's yet to master even the most rudimentary bits of filmmaking. Graff doesn't even bother to link scenes together in a way that could be viewed as natural or intuitive. Sequences crop up with no sense of flow or transition between them and even the most astute of audience members will wonder, "Wait, how the heck did we get to here from there?"

Graff's film also has the unfortunate habit of telling versus showing. Characters talk about important things that happen that the audience never sees ("We've been practicing in secret!") and sequences that prove essential to the plot are never shown. For a film that's ostensibly about the choir making their way to the national competition, it's nothing short of bizarre that Graff presents the lead-up regional competition with just two scenes: one of the choir's primary enemies performing and one of the choir despondently boarding their bus. Just how did the choir lose if we never saw them perform? And it's not as if Joyful Noise doesn't have time for musical numbers, as each and every one is shown in its entirety, even when they're not even remotely key to the production. I'll never understand why Graff felt the need to show a five-minute scene of Queen Latifah singing a song comprised almost entirely of one repeated line, but didn't make time for a performance by the entire choir that is essential to the plot.

But while the film is both inept and absolutely cornball, Joyful Noise comes across as so ceaselessly well-intentioned that it's hard to get angry at it. It may be ham-fisted and poorly crafted, but Graff and his cast appear to genuinely want to deliver a feel-good film about faith and family. Joyful Noise barely qualifies as a film and is absolutely nothing to sing about, but goshdarnit, does it want its audience to stand up and dance.