close
To jump or not to jump

Man on a Ledge 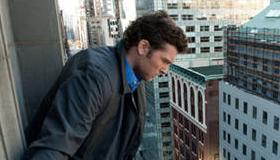 Sam Worthington plays an ex-cop and current convict attempting to exonerate himself for a crime he claims he didn't commit by threatening to jump from the ledge of the Roosevelt Hotel's 24th floor. He does this while his waif of a brother (Jamie Bell) and his Victoria's Secret model/girlfriend (Genesis Rodriguez) commit their own crime by breaking into the high-security skyscraper across the street. It's a game of distraction and payback, with a foundation that's sturdy as family but littered with laughs that seem sometimes accidental and occasionally borne of incompetence. Aussie Worthington and Brit Jamie Bell play dueling accents (no one wins), Kyra Sedgewick plays pain-in-the-ass reporter Suzie Morales in a red blazer and miniskirt combo I think I wore in 1992 and Ed Burns is a cop. That last one yields the biggest laugh. But clichés and thin thrillers are what we can expect from January releases and while Man on a Ledge has predictability to spare, it also has something that makes your time spent worthwhile: legitimate suspense. First time feature director Asger Leth surprises—his first movie, the doc Ghosts of Cite Soleil, was also about hard-living brothers and the build-up as they set off to fight in seemingly endless gang wars are some of the tensest moments ever seen in a documentary. Here, Leth makes Worthington's ledge a constantly frightening gimmick and the pacing between scenes is so effective, you'd be on the edge of your seat if the film didn't constantly make you feel for the back of your chair. The marketing hasn't roused audience interest, but if enough venture in, they should spread enough word of mouth that Man on a Ledge will make its money back and then some.

Nick Cassidy (Worthington) faces 25 years in prison for stealing a diamond the size of a paperweight. While in lock-up, his father dies and his estranged brother (Bell) claims Nick's arrest broke Dad's heart. When you've lost everything, why not go out in a media storm? After an unbelievable escape from jail, Nick cleans up and checks into a fancy hotel. He eats a "last meal," wipes everything down, and walks on the ledge from which he threatens to jump, much to the thrill of the crowd below. When Ed Burns enters the scene as a negotiator you have to laugh; it's ironic his Queens accent is responsible for what passes for regional authenticity here. Burns is there for one reason—to open the scene to the woman Nick demands as his negotiator: Lydia Mercer (Elizabeth Banks, owning this film). Lydia recently lost a jumper off the Brooklyn Bridge, and that very public and fatal failure has made her a drunk and an outsider on the force. Both police pariahs, Nick and Lydia are on equal footing—and now, they have a way to save each other from their shameful pasts. Plus, since they're both hot and single, it's one high-stakes meet-cute.

It's enormous fun to watch these actors fine-tune their parts. Though the accents never iron themselves out, each of the performers demonstrates some sense that he or she is processing what they're saying as they speak. Elizabeth Banks is marvelous—her semi-scripted negotiator patter clashes with the emotions on her face, and the trick of choosing which pieces of her to believe is the film's most impressive feature. In a way, Man on a Ledge is aware of its own crudeness, but that's not a slight. No one's confused about the plot: it's a heist film about disgraced cops—and the notions of loyalty and upstanding values are strong. And where else are you going to find a more monochrome and immersive metaphor for these ideals than a guy on ledge in a loud-mouth town? Around Nick, bystanders irked at the gridlock are screaming, "Jump!", women on the neighboring rooftops wave encouraging signs (one reads: "Single?") and news-copters threaten to blow him off the ledge. The forces that can sway his agenda are moving in so many directions it's hard to see how staying on one course is even possible: this isn't about the diverse perspectives of a city—this is about the strength required to hold onto principles. The corporate villain—and we can smell his brimstone cologne in the theater—is David Englander (a gloriously detestable Ed Harris), who says, "There are people who take what they want and then there's everyone else." Where Nick, Lydia and their small circle of supporters fit in Englander's Venn diagram is unclear, but what they really want is to rise above it.