close
Pain in the assery—for a good cause 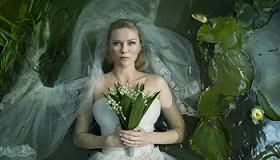 This wedding/apocalypse horror/comedy is the most profoundly unique one note symphony ever played. Both beautifully self-indulgence and drably overdone, Melancholia uses pretty images of ugliness like they're a cathartic vehicles, implying conclusions but providing none. Broken into two chapters named for two sisters, chapter Justine is about Justine's (Kirsten Dunst) ill-fated wedding; chapter Claire is about the destruction of earth by planet Melancholia—or it's a metaphor about life without a honeymoon. Filmmaker Lars von Trier has gone from provocateur to full-fledged outcast (his comments during a Melancholia press conference at Cannes got him banned from the fest here forward) and many will want to see the film behind his banishment—though his odd words in spring have nothing to do with this marathon of beauty, sorrow and bone crushing futility.

Justine's wedding is the sort of dreams: everything is beautiful and swimming in luxury—brother-in-law John (Kiefer Sutherland) has "bought" her the wedding and he's the sort to know the cost of everything and the value of...well you know. Justine and groom (Alexander Skarsgård) approach the wedding by way of a narrow dirt road far too windy to handle their stretch limo. It's a tidy comic metaphor: luxury (like love?) isn't built to fit on natural paths, ergo nature knows not happiness. The couple arrives two hours late to their reception to find Claire imploring them to care about the guests while the wedding planner (Udo Kier, hilarious) "flames" with contempt. Charlotte Rampling drips bitterness; once the most beautiful woman in England Rampling has transformed herself into a mother-monster who damns the marriage as easily as she abandons the children. Father (John Hurt) is too busy flirting to notice his duties. Justine is apparently so skilled as an advertising copywriter that her boss usurps his best man speech to coerce a campaign tagline out of her; meanwhile, her future husband might be "simple." The wedding ends at dawn with rich stragglers making their ways home and the groom following close behind. The marriage was stillborn at best.

Claire's half of the film concerns the nearing of planet melancholia, whose orbit may or may not destroy earth. Justine's fallen into a debilitating depression, and her fog has the cheap, insoluble quality of construction paper—you can see the fibers and feel the flimsiness of her mood—it looks like something the mentally fit would just sweep away. Regardless, Justine is stuck in her despondency while the saintly Claire cares for her and inspires John's impatience. When it's clear the earth nears destruction, Justine reaches a state of peace. Claire oh-so-reasonably flips out. Her husband proves himself an unbelievable coward and the earth endures photogenic tragedies, like hailstorms and quick-sinking mud (the slow motion and violin music helps bring the pretty). Their world's annihilation by fire is the kindest gift von Trier could have bestowed upon them. What else could relieve the tortured Justine, save the young son from a future of meaninglessness or snap the admirable Claire out of her irrepressible goodness? Someone had to put a stop to it all. And no one wants to see an Armageddon that's not fit for magazines layouts.

At the risk of analyzing the filmmaker, von Trier identified his last film, Antichrist, as a project borne of his post-divorce depression and I think the tail end of his traumas is apparent here, but the wedding is just a jab, the real meat is utterly solitary. Justine's depression is well portrayed by both Dunst and von Trier; it all appears as unnecessary and unavoidable as any random misfortune. And the justification that Justine has for feeling connected to the tragedy is she "knows things." In the midst of the apocalypse she throws out the number of beans in a bottle to prove her clairvoyance, spotlighting the films complete agnosticism. There is no comfort here, none of any sort. Luxury is folly and love is precious because it's unreliable.

The emotional resonance that comes of treating depression like a planet and death as an absolution feels very intimately drawn and personal: depression is an orbit and suicidal thoughts seem like the easy solution to such an indestructible patina of sadness. This, as Antichrist's musically rotting fox intoned, is where "Chaos Reins." Melacholia's magazine-glossy beauty evokes anti-depressant ads with maniacal glee; if it weren't so obsessively in love with itself it might be repurposed on the education film market to explain MAO inhibitors to the newly diagnosed. (Mr. von Trier doesn't have a patent on glibness.)