close
The war on drugs grinds on, degrades women. 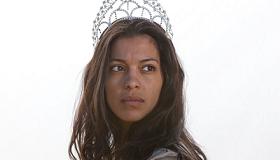 Where his last two films' titles (Drama/Mex, I'm Gonna Explode) aptly indicated a willingness to toss short-fuse melodramatic dynamite at audiences (and expect a reaction mirroring his youthful protagonists' volatility), Gerardo Naranjo's fourth feature Miss Bala is one long slow burn with no final bang. "I used to be more superficial," Naranjo told The New York Times while premiering his film at the Cannes Film Festival last May. "I was hoping that I would evolve one day, and I think the seriousness of this subject gave that to me." "This subject" is the drug war, and its ability to destroy the life of the most uninvolved Mexican bystander: in this case, aspiring model Laura Guerrero (Stephanie Sigman) is merely hanging out in a dancehall when she witnesses a shooting. She gets away, but that's only a temporary respite: her life is now determined by drug lord Lino Valdez (Noe Hernandez). A tragedy depicted in 130 meticulous shots, Miss Bala is impressive but hollow, a you-are-there drug war-critique so determined to avoid exciting the viewer you long for the irresponsible energy of Naranjo's earlier work. The topical subject may draw larger-than-usual audiences, as will the undeniably formidable technical achievements.

Even a viewer walking in with no knowledge of the film's plot can sense an ominous chill in the opening shots of Laura's room: the aspiring model's wall of clippings include the words "FASHION VICTIM," as if inviting glamorous and iconic early death. Her immediate goal is more mundane: getting a slot in the Miss Baja California Pageant, which means sneaking away from her younger brother for a bit. The audition goes terribly; following her friend to a dancehall is even worse when, slumped against a barrier, black figures rappel down a wall. The audience can see the imminent threat, but Laura can't: the chilly depiction of the danger she's almost certainly about to encounter arouses simultaneous thrills in the viewer and helpless concern for Laura.

Miss Bala would make for a revealing double-feature with Gianfranco Rosi's 2010 documentary El Sicario: Room 1604, in which a reformed ex-gang hitman outlines, with a Sharpie and paper notebook, precisely how many policemen from every graduating class are corrupt or how many cars to assign for a standard hit job. Sicario tells but never shows: Bala inverts that, plunging Laura into seemingly formless, unlabeled chaos. After watching Sicario, it wouldn't surprise viewers when Laura's attempt to get help from a cop ends with him returning her to the gangsters from whom she's already escaped. In its depiction of a chain of corruption extending to the highest reaches of both the Mexican military and government, the final bitter joke is that Laura's modeling escape valve feeds back into the same narcocartel battleground; even the most frivolous industries are connected and implicated.

As in that first shot of Laura about to meet a peril she's unaware of, the character's repeatedly dangled before dangerous situations, trying occasionally (before resignedly submitting) to get away or stall for time, and her powerlessness is foregrounded every time. Determined to avoid action movie thrills, Naranjo privileges confusion and a constant state of implicit threat: a late-breaking border shoot-out aside, Miss Bala mercilessly buffets its heroine with stately reserve. The feeling of an inevitable downward spiral is established early, and—after numerous false escapes—it's impossible to do anything other than admire Naranjo's patience and skill. An end credits, title card fills in the grisly statistics on civilian casualties of the drug war, effectively recasting the entire film, regardless of its potentially provocative presentation of modeling as an almost arbitrarily selected strand of Mexican life inextricably tied up with the drug war, into merely a superior awareness-raising vehicle with an unambiguous point.