close
Brother, can you spare some brains?

One For the Money 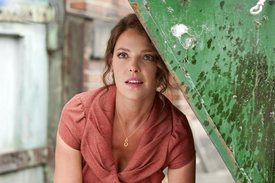 It's official: Katherine Heigl will not rest until every last person on Earth is a misogynist. A self-made woman who seems to be deeply uncomfortable with the notion of her own success, it's as if Heigl is only interested in roles that portray single women as being one good man away from fulfillment, happiness, or—most distressingly—general competence. One for the Money finds Heigl playing Stephanie Plum, a recent divorcée who returns to her New Jersey hometown, finds unexpected work as a bail bondsman (bonds-person?), and is soon on the hunt for the gruff fugitive who took her virginity on the floor of a local bakery some 15 years earlier. Directed by Grey's Anatomy vet Julie Anne Robinson with all the visual dynamism of the TV dramas from which Heigl has supposedly graduated, and graced with a confined, half-considered look that suggests the production design ended at the edge of every frame, One for the Money is as static and ugly as romantic-comedies get, the distractingly fragmented coverage of simple dialogue scenes suggesting a general ineptitude that's rare at the studio level. Despite being Heigl's most unfortunate project this side of Zyzzyx Rd, her star power, along with enduring affection for the 1994 Janet Evanovich novel that inspired the film, should result in a low 8-figure opening weekend haul before a steep decline in the weeks to come.

Whereas most of the asinine rom-coms that pollute our multiplexes are driven by the idea that both partners in a couple are fulfilled by monogamy, Heigl's films (post-Knocked Up) are unfailingly convinced that only women are rescued by it, saved from themselves by a good man who will love them only because the script ultimately demands they do. The characters she portrays are shrill (27 Dresses), humorless (Life As We Know It), and helpless things in a big and scary male-driven world (Killers), all of them unified by the mutual understanding that survival is only possible if they can tame a man who will make it possible. To that end, Stephanie Plum is something of a grand thesis statement, a perfect storm of everything that makes Heigl's films so problematic. Plum is Heigl's logical conclusion, a character so helpless that she literally can't feed herself, eating nothing but cheese puffs unless there's a hulking dude around to fix her a hot meal.

As the story begins, all we know about Stephanie Plum is that she's a recently fired divorcée with no discernible skills beyond a name fit for a detective agency and a New Jersey accent so forced that you're half-convinced she's being played by Mickey Rooney in drag. Her marital status as well as her entire personal history is presented in a furious splotch of throwaway lines. The New York Rangers t-shirt she wears is perhaps the most revealing insight that the film affords us of its heroine, so far as it reveals that she abandoned her New Jersey roots in favor of the rival team for which her ex-husband rooted (and that she married someone who has good taste in hockey teams).

The clumsy and sporadic voiceover certainly doesn't convey any meaningful information that couldn't have been illustrated visually (of a flashy yellow sports car, the narration notes: "It was pretty flashy and yellow"), and yet when the story's central mystery spirals into realms of nonsense that would confuse Raymond Chandler, the voiceover is nowhere to be found. Plum lands a gig as a bounty hunter, and her very first case is to bring in Joe Morelli-drink every time she says "Morelli" and you'll be dead by the second act-the thieving dreamboat who stole her heart in high school. Morelli, played by a surgically rejuvenated Aidan Quinn (or as the credits call him: "Jason O'Mara"), is accused of having murdered a man in cold blood, but we know that his abs are way too flat for that to be true. He flitters in and out of the story as if the film is proud of its contrivances, his character a recurring reminder that the film has no regard for arcs or stakes or the viewer's mortality.

Between them, the film's three credited writers share one film credit, and that was on a short called Goodnight, Vagina. I must admit that I haven't read Janet Evanovich's novel, but so far as difficult screen adaptations go, I somehow doubt that it was a challenge on par with Tristram Shandy. Yet the script maintains no sense of tone, purpose, or momentum, playing like a vile hodgepodge of Bridget Jones, The Maltese Falcon and My Big Fat Greek Wedding rather than finding its own identity. Except for here, the protagonist feels like the macguffin-and instead of Humphrey Bogart, we have an actress with such a trained eye for quality that she saw Valentine's Day and thought: "I need to star in the sequel!"

Given the character's uselessness, Stephanie Plum's journey towards competence should be imbued with a mythic scale on par with The Lord of the Rings, but One for the Money is too devoted to its dizzying sideshow of red herrings and supporting characters to dramatize its protagonist's progress in any meaningful way. The actors who round out the cast acquit themselves nicely: Debbie Reynolds cameos as a frisky grandma, Leonardo Nam plays reprises his iconic character from The Perfect Score, and Fisher Stevens shows up for a slimy second, only to inadvertently save Plum from certain death. (I'll need to see a shooting script before I'm convinced that the scene in which he flips off the sky while yelling "Suck it, God!" wasn't a candid moment between takes.)

Of course—spoiler alert—when Plum eventually unloads an entire clip into a bad guy's chest and finally achieves her own agency, she isn't the least bit fazed by the experience, as by that point in the film a realistic human response to such an event would be completely incongruous to the previous 100 minutes. Tragically, the cellulite that softens a bullet's impact on Plum's ass is the closest the film gets to rewarding its heroine for her unique abilities, as it tries to earn a half-hearted giggle before Plum abandons a potential career in bail bonds, goes home, and waits for her man prey to come knocking. The scary thing is, One for the Money is convinced that this makes for a happy ending.