close
An ode to movement 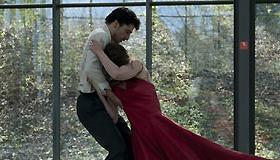 Wim Wenders' stylish, heartfelt tribute to famed German choreographer Pina Bausch benefits only nominally from the 3D treatment and communicates relatively little about Bausch herself, apart from the tremendous impact she had on her faithful and eclectic troupe of international dancers. It is their appreciation, expressed in one-on-one interviews and a series of impressionistic performances of her most renowned works that give the film its warmly eulogistic feel. It's a mood piece more than a conventional documentary and it should do comfortably above average business on the theatrical doc circuit, particularly given its location on the list of Oscar-nominated documentaries.

While it's been widely noted that 2011 saw the release of not one but two 3D documentaries by former New German Cinema pioneers (Werner Herzog's Cave of Forgotten Dreams is the other), it would be stretching credulity to draw anything but a coincidental connection between the two. Wenders' Pina is, in every conceivable way, a quintessential Wenders non-fiction effort: aggressively stylish, narratively amorphous and unusually insightful. Those familiar with the director's work in such films as Notebook on Stories and Clothes, Lightning Over Water and even the unusually accessible Buena Vista Social Club will recognize the backdoor approach to getting inside his subject, a Wenders hallmark that often sews nagging frustration into the path to deep satisfaction. In all such cases, the key is patience and a willingness to yield to Wenders' unpredictable rhythms and unexpected detours.

Despite the lack of real historical perspective on Bausch since her passing in June of 2009, few would dispute her impact even during her lifetime. It is noteworthy, then, that Wenders foregoes any outward analysis of that impact in favor of shining a spotlight on those who must now carry her torch: the dancers of the Tanztheater Wuppertal Pina Bausch. Shot entirely on the troupe's home stage as well as various exterior locations throughout the city of Wuppertal, Pina finds a series of complex thematic and personal through-lines via a simple intercutting between performance and interview. What emerges is a portrait of a dancer and choreographer whose existential bravura and courageous willingness to experiment with both modern and classical forms, often shamelessly merging them both, enabled dancers from all walks of life and all corners of the globe to come together in a single, tightly-orchestrated unit that enables each to uniquely express themselves as individuals.

Their deep gratitude—expressed directly in words and indirectly through the dances themselves—leaves viewers feeling a similarly deep appreciation for and connection with Bausch, even if the details of her personality and life are scarcely even broached. Pina is really less a documentary than a unique kind of performance piece, a classification that falls uncomfortably outside established cinematic genre walls, but nonetheless should be acknowledged to assert that subjects which often defy categorization can and ought to be treated in like fashion.

The performances, it should go without saying, are mesmerizing, benefitting from the kind of artful camerawork (by Hélène Louvart) and art direction (by Péter Pabst), that underlines a cinematic dimension to Bausch's work not immediately evident when viewed on stage. That bifurcated dynamic was clearly the impetus behind Wenders' desire to shoot in 3D, a choice that works better during the onstage performances to reinforce the audience's sense of being present before a real proscenium. Nonetheless, Pina does not rise or fall on the use of 3D. As with nearly all such efforts, some will find it more of a distraction while others will praise it as a worthwhile enhancement. Sans 3D, Pina becomes a more unified work of undisputed merits, a passionate, fitting tribute from one of Europe's preeminent filmmakers and documentarians.