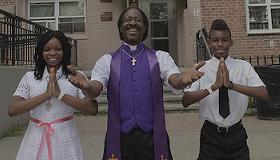 Thank God for Spike Lee—that human blowtorch, the filmmaker made of acetylene. In what's shaping up to be a tepid Sundance, he showed up to remind everyone what a true independent vision is: a crime of passion, a fist to the face, too much, too loud, too uncontrolled to be contained.

As usual, Spike's fiery and profane personal appearance got all the press. He called out Hollywood for its inability to understand black America, railed at the stupidity of the audience's questions, and the whole thing was live-blogged and re-tweeted and parsed and packaged almost before he left the stage. His new movie Red Hook Summer was drowned out by all the noise. It shouldn't have been, because it's a strong and provocative return to form, a tough-minded urban fable about the magical-realist Brooklyn of the mind that is as central to Lee's work as Roma was to Fellini's. While Lee's difficult subject matter and radical cinematic approach make releasing this film a challenge, Spike made it for a price and it's doubtful he cares what you and I think. As a pivotal entry in Lee's impressive body of work, Red Hook Summer is essential viewing, and that makes it one for the ages.

A lot of the advance buzz has focused on Lee's decision to revive Mookie, his character from Do The Right Thing, leading some to call Red Hook Summer a sequel to that 1989 masterpiece. In the strictest sense it isn't, but it is kindred to that work. Using the device of a 13-year-old boy's summer spent visiting his minister grandfather, Red Hook Summer walks the same alternately mean and magical streets its precursor did, with a similarly vast ensemble there to take the temperature of a changed place. Gentrification, hinted at by a single scene in Do The Right Thing, has now transformed Brooklyn. Black enclaves have become multi-hued, African Americans are being priced out of their own homes, and places and institutions once taken for granted have vanished or are in the process of dying.

Chief among these waning communal institutions is the Church. Lee has dealt with issues surrounding the black religious experience before—notably in the tragic subplot to Jungle Fever, where minister Ossie Davis murdered his drug-addicted son Samuel L. Jackson in the name of God, and in Malcolm X's inevitable examination of the Nation of Islam. In Red Hook Summer, Lee looks squarely at black Christianity as he never has before. It's a prickly, layered and conflicted portrait, informed simultaneously by Lee's awareness of the historical use of Christianity as a white tool for the pacification of blacks and also by his sincere recognition that many of the African-American community's most benevolent and creative social impulses have been expressions of faith.

So we find ourselves in a cinematic world dominated by Little Piece of Heaven, a faltering storefront church with a leaky roof, a diminishing congregation, a debt that needs refinancing, and Enoch (a stunning and bravura Clarke Peters), the energetic, perennially optimistic pastor everyone calls "Bishop." When Bishop's grandson "Flick" is left with him for summer vacation, a generational conflict erupts instantly. Flick is the African-American experience as filtered through suburban affluence and American monoculture: he takes his name (and his identity) from the iPad he watches the world through, views his grandpa as an alien life form and is appalled by the raucous devotional rituals Bishop forces him to be a part of.

What Flick is too young and self-absorbed to understand is that a fundamental pillar of African-American identity is dissolving under the influence of the same relentless, mass-culture messaging he himself is a product of. What's left is a cacophony of voices: the vestigial Christian evangelism of Bishop and his flock; the brutal street entrepreneurialism of gangbangers, personified by the ferocious Box (a superbly menacing Nate Parker); and the alternately entitled and generous encroachments of the white world.

Depicting a community increasingly without a center, Lee's cinematic tactics are appropriately and brilliantly diffuse: he moves easily between comedy, fantasy, sudden eruptions of conflict, and, once Flick bonds with the spirited and idiosyncratic church girl Chazz (a luminous Toni Lysaith), the giddy uncertainties of young love. Remarkably, Red Hook Summer was widely attacked as "messy," even in the supposedly adventurous Valhalla of indie spirit at Sundance. But maybe that's not surprising after all.

To this writer, Lee is possibly the single most misunderstood great filmmaker America has ever produced. The son of a jazzman, he weaves his way across character and story the way a musician might, chasing melodies of expression, working them, testing them to see where they lead. The core of this film (a community gripped by a crisis of identity) is as carefully worked out as an old songbook standard, and Lee returns to it frequently. But he also allows himself the space to branch out, to riff on related topics, rejoining the main theme only after he exhausts the surrounding possibilities. It's an alternative approach to cinema—a unique stylistic signature that has informed Lee's more personal works for over 25 years. But even at Sundance, Lee's provocative technique was attacked by those who've grown accustomed to spoonfeeding—the Coltrane of our cinema, punished yet again for not being its John Williams.

No one accustomed to the easy solutions and monochrome characters of mainstream Hollywood is going to understand what Lee's after with Red Hook Summer. But there is more cinematic energy, more artistic truth, more anger, more tenderness and more love in this movie than in any five recent titles you can name. Like Do The Right Thing, Red Hook Summer begins as a gentle character comedy and then erupts into a sudden reversal that is possibly the most powerful and disturbing sequence Lee has ever created. It's a film that makes you laugh, weep, rage and gasp, and, love it or hate it, you will definitely talk about it afterward.

If that's not worth the price of a movie ticket, I don't know what is.