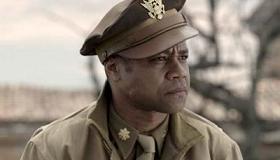 Though the premise seems relentlessly lucrative, the rumor is that George "StarWarBucks" Lucas spent more than a decade getting a distributor for Red Tails. This true life action/drama about WWII's Tuskegee Airmen, the first all-black air squadron, is precisely the sort of broadly drawn propaganda that boosts American Patriotism while it denounces the evils of bigotry—for the mass market, it's a win-win. Such a story is made to be colored in jumbo crayon, and at first you might long for a more nuanced approach, but this film was produced in the 1940's serial style that's made Lucas Films enormous; it's made for exporting and plays well for kids old enough to know drinking is evil, glory-hogging is dangerous, Nazis are bad and racism is the worst "ism" fit to print. It tests your patience in plenty of ways (the score nearly drove me from the theater) but it also demands and nearly wins your love. I had the honor of sitting alongside some WWII veterans (they talked straight through what must have been aircraft porn to them) and the possibility of actual Tuskegee airmen viewing among us created buzz in the aisles. I encourage seeing Red Tails in the theater for the chance to encounter the enthusiasts and veterans the film lures. As a cultural product, it's cheese, but cholesterol aside, the box office should prove how much we love comfort food.

African American pilots were deemed "mentally inferior," according to a 1925 military study. It's pasted onscreen before a phenomenally ill-advised credits sequence intrudes on a perfectly good aerial battle (poor Ne-Yo's name never looked stupider). The Tuskegee Airmen (as represented here) aren't just the best the air force has to offer but the best of young America, military or civilian: educated, intelligent and bred with the expectation to become engineers, politicians, leaders. That said, each soldier takes a pre-ordained role: the musician (Ne-Yo), the ecclesiastic (Marcus T. Paulk, Moesha), the curmudgeonly mechanic (Andre Royo, CSI NY), the Joker (Elijah Kelly, Hairspray), the ace (David Oyelowo, The Help), the harried leader (Nate Parker, Great Debaters); and while there are dozens of flyboys in the air, we never interface with more than four at a time. Each of them (save the mechanics) rides his machine into the sky and, after overcoming fits of bigotry from other soldiers, earns the respect and gratitude of all whom they protect. As the men's Major in command, Cuba Gooding Jr. is incomparably charismatic (though someone gave the man a pipe that's as absurd as a parrot on his shoulder) and Terrence Howard is the Colonel, who plays politics between the Pentagon and the barracks, angling to get the airmen off the ground for a fight instead of a patrol for German trucks ("I can't tell my dad all I killed was traffic.") It's possible the battles are accurate, as are the vintage planes (from what I heard mid-screening), but what moviegoers want to see is victory: in the air, and on ideological ground.

David Oyelwo is this film's Denzel Washington (the comparison to Glory is imminent) and Oyelowo blows away his made-for-TV colleagues, even through a ridiculous romance with an "Italian" girl he never understands—their conversation is primarily "I don't speak Italian" and "Non parlo inglese," but they plan marriage anyway. There are other odd almost-jabs: one man is a POW at Stalag 18 (Is Anthony Hemingway admitting he's not quite Billy Wilder?) and a mechanic played by Method Man hits an engine with his tools only to be scolded, "Metal on metal is not music!" But awkwardness aside, the cast is exactly like a 1940s glamor shot: they couldn't be more iconic and two-dimensional. While the film is clearly made to be a morality tale for tweens and an upstanding representation of the Tuskegee Airmen painted in honorable and broad strokes, it's also a strange antidote to other stories that struggle with race issues and come up lacking. The Help condescendingly attempted to tackle the issue of segregation via a verbal battle of social one-upsmanship between catty women. Ironically, that domestic melodrama lacks a particularly dignified victory—Viola Davis' beautifully realized final monologue notwithstanding. Here, the Airmen circumvent the issue of race by being bigger men than their aggressors, Nazi and Yankee. But even when a key German Ace dies in a beatific explosion, their celebration lasts only a second. The men who matter are their other Tuskegees, and watching them battle enemies both foreign and domestic can only be so meaningful as the self-sufficiency and determination that always overcome the small-mindedness of tyrants.