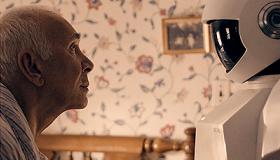 Jake Schreier's Robot & Frank is one of the big crowd-pleasers of Sundance 2012, where it was perhaps a bit over-praised. The story of an elderly cat burglar and the caretaker robot who becomes his partner in crime, the film is light-fingered and charming—an auspicious directorial debut, in the Jason Reitman mode. It's also far closer to a mainstream movie than almost anything else at the festival, and at Sundance, that often redounds to a film's favor.

You must imagine auditoriums full of moviegoers who are coming off a steady diet of brutalizing films like Kirby Dick's expose of military rape The Invisible War or Antonio Campos' repellant neo noir Simon Killer. Suddenly they find themselves watching something that can honestly be described in Hollywood-ese as a "sci-fi buddy caper comedy." The relief in the air is palpable. So though Robot & Frank played to packed houses in Park City, it's more likely to find its real-world audience in the home market, after a short if well-reviewed theatrical run.

None of that is meant to detract from the film's genuine pleasures. Chief among these is Frank Langella, a superb actor in the midst of a remarkable Indian Summer to his long career. As Frank, the crusty and unreformed old burglar whose memory is starting to go, Langella is meant as a sort of stand-in for technological dislocation in accelerated times. He lives in a future only slightly ahead of our science fiction present: the smartphones are smarter, the cars smaller and zippier, and the libraries, which Frank still frequents, are being turned into museums—memorials to what's being called the "library experience," in that awful way we have of putting quotation marks around our cultural discards.

A caretaker robot is provided to Frank by his son (James Marsden), and to Frank's delight the robot's programming doesn't provide it with any morality above preserving Frank's health. By bartering away his addictions to Cap'N Crunch cereal and processed meats, Frank is able to corrupt his dexterous new pal, and soon finds himself making a comeback, with an electronic partner in crime.

As in all good science fiction, there are real issues percolating here—about the death of literacy, over-reliance on technology, and a culture that increasingly makes human beings feel more obsolete than last year's iPhone. Christopher Ford's thoroughly proficient script doesn't really do anything with these issues though, unless the very notion of a Bonnie & Clyde alliance between an elderly Luddite and a computer is meant as some kind of "we can all get along" statement. Most of the secondary characters are ciphers: as Frank's children, Marsden and Liv Tyler play clichés of yuppie and hippie respectively, and librarian Susan Sarandon, still sexy at 66, is given little to do beside glow when Frank comes around.

Fortunately Langella is in virtually every scene, and he is a marvel of virile intelligence, wringing every bit of nuance and humor out of the best screen role he's had since Frost/Nixon. In Langella's hands, what might have been a smarter than usual TV movie takes on a kind of human grandeur rare for such a cinematic soufflé. Though Robot & Frank will undoubtedly provide some bright new talents with an important launching pad, it's the old pro who really shows them how to aim for the stars.