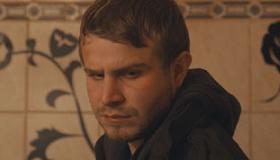 Many years ago, Sundance gave the world the original Saw snuff flick, launching a lucrative bait and switch franchise where a moralistic psycho "hero" dispensed life lessons about nothing while torturing people oncamera. Though it has none of Saw's commercial upside, director Antonio Campos' glum, mopey and pointlessly vile second feature Simon Killer served a similar function at Sundance 2012. Pretending to be a transgressive character study, Simon Killer really only exists to torture the audience with an insincere, poorly realized vision of human ugliness. Even among film festival sophisticates, word of mouth was appropriately rancid. Any American distributor who bothers with this one would be well advised to book it into bondage clubs, where at least half the audience is likely to enjoy pointless, masochistic experiences.

Brady Corbet is Simon, a recent college grad rebounding badly from a failed relationship and from his unfortunate commercial decision to create some sort of improvised major for himself about the relationship between eye and brain (note to Campos: the gruff, stocky Corbet would be more convincing as one of the "Real Housewives of Beverly Hills" than he is as a man of undergraduate science). Simon winds up in Paris in a borrowed apartment—shuffling through what's meant to be a gritty but is mostly a touristic vision of the City of Lights, aimlessly jerking off to web porn, and sending out unrequited text messages to his old girlfriend. Then Simon meets that hoariest of movie clichés: a hooker with a heart of gold. And suddenly...we're in a different movie altogether, where noir tropes including blackmail, hot sex and misogynistic violence are indifferently on display.

If that sounds at least passably interesting, it isn't, because Simon is such a pointlessly repellant character and Campos such a redundant visual stylist that there is absolutely nothing here to glom onto. That isn't an argument for "sympathetic" or "positive" characters—Shakespeare's most popular play in his own lifetime was Richard III, built on perhaps the most monstrous protagonist in all of dramatic literature. But it isn't enough to simply drop a half-baked sociopath into the middle of a movie and call it art. The monster has to have some sort of psychological truth at his core—he has to be interesting, plausible, even if his actions are outwardly repulsive or inexplicable. In Simon Killer, we have a character study that frequently feels like it was made up as it went along—it is so back loaded with unlikely human coincidence and lurching plot twists that nothing has any real impact, beyond the walking ick factor of Simon himself.

Maddeningly, Campos' main visual idea is to walk behind his characters for endless DSLR tracking shots that hold his actors' backs in focus while blurring everything around them. I suppose it could be argued this is a brilliant visual representation of Simon's isolation, his blurred worldview and self-obsession—except the approach isn't limited to shots of Simon, it's used uniformly, and literally occupies something like a fifth of Simon Killer's running time.

The "eye-brain-science" motif, and a few moments where Campos makes like Gaspar Noe and uses subjective camera and seizure-inducing visuals to put the audience in the mind of Simon as he dreams, raise the possibility that Simon Killer is meant to be taken as an internal fantasy, a post-college daydream of transgression and obsession. If so, Simon needs to cut down on the pizza before bedtime. And Sundance needs to book its films a little more thoughtfully.