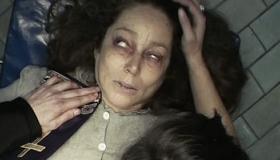 In this Catholic exorcism mockumentary, we expect the devil to win because the exorcists are all amateurs. Isabella Rossi (Fernanda Andrade) goes to the Vatican to check in on her mother Maria, a woman whose exorcism in 1989 ended with the death of a nun and two priests. Isabella invites a director to shoot her appeal to the Vatican for a church-ordained exorcism. The Vatican priests say no, so she finds some "off-Vatican" types—rogue priests who exorcise the cases the church has characterized as mental illness instead of possession, a self-ascribed duty that makes them seem humane and super-crazy-stupid. Rebellion isn't even Catholic thinking-if priests wanted to go rogue, they'd choose Protestantism. The mother/daughter drama should have played a bigger part in this film as the 87-minute runtime passes quickly and leaves us feeling utterly short-changed. Audiences may get angry (on Twitter, they already are) and bad word-of-mouth will breed a sharp drop-off at the box office.

The priests in Devil Inside talk at the pace of third grade textbooks: "This could be a multiple demonic possession...maybe you remember that from the class you took." (When a movie is 87 minutes long, believe me, we all remember your limply explicit phrase.) The psychiatrists sedate Maria extensively but cameras and invocations spark her to damnable life. She howls, she babbles and she can smell out her daughter's random pregnancy termination and the guilt coming off each "priest." And her vibe is so potent everyone feels aftershocks. But before Maria's case takes over, the first exorcism we see is Rosa (Bonnie Morgan), a girl whose possession is so violent her mother had to put her in the basement. Her dangerous yoga postures are instantly cliché, but Rosa stands out when, mid-exorcism, she starts her period, which is offensive because it's played for aberrance. (This film makes makes Superbad look feminist.)

The scariest moment of the film occurs when Isabella finds the more frightened of her two priest helpers eating alone in the dark. His haunted expression when he turns the lights back off is still looming in my imagination. Under director William Brent Bell, some of the shocks have real oomph, but the movie still labors under a plot made of missed opportunities and untended mysteries. And when the movie ends, you're told to visit www.TheRossiFiles.com—is the point of the film really just a trailer for a website? Even if the site offers all the answers to the mysteries the film leaves unresolved, it's a loss—a movie has to be its own invention to stand up at the box office.

And a film about the nature of the body and the spirit has to have a concept of what those things are, but Devil Inside is so lacking in depth that its concept of spirit is bending torsos and bleeding laps—oh, and the possessions are all women, by the way. Maria seems to lack any correlation with her daughter, a huge mistake in a film that supposedly revolves around a mother/daughter bond. While The Devil Inside has some decent moments of shock—particularly in the third act—it touches too lightly on the topics that could make it worth our time. It's a shame. It's not easy to make a really scary movie, but it's not hard to think about what makes a satisfying movie universe—and the answer isn't pea soup.