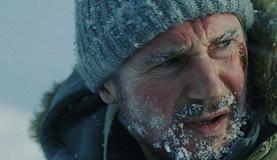 Having directed Liam Neeson in the competent 2010 TV upgrade The A-Team, Joe Carnahan again harnesses the actor's late-career reinvention as Charles Bronson for The Grey, in which Neeson does things like punch a wolf in the face and tell a surly plane crash survivor, "I'm going to start beating the shit out of you in the next five seconds." But Neeson's casting is misdirection: as Alaska oil worker Ottway, hired to shoot wolves who threaten his colleagues, Neeson is here not so much to indulge in the violent swagger he displayed in Taken as to contemplate what it means to be alive and how to reconcile the mind to death. This is admirably ambitious, but Carnahan's not nearly good enough a writer or director to pull it off: the results are portentous, muddled and not nearly as entertaining as Neeson's usual face-punching antics. When word gets out as to The Grey's more philosophical content, audiences will fade away.

At the film's start, Ottway's in bad shape, his tormented voiceover announcing that he feels like one of the damned. He goes outside and sticks a gun barrel in his mouth, but a wolf's cry stops him—a silly, vaguely macho moment that's the first of many. Ottway and co-workers board a plane for an unnamed destination and on the flight, Ottway sleeps, dreaming of his long-gone wife. As throughout the film, his maudlin visions are interrupted by a sudden, horror-movie-jolting loud noise: the plane is crashing.

On the ground, it's no surprise that Ottway takes command of the scanty seven survivors including the endlessly obnoxious John Diaz (Frank Grillo), whose ex-con swagger and mockery of his survivors makes you wish the wolves would come for him sooner. Canis lupus takes the form of a band of CGI monsters (when they approach the survivors' fire, they're disembodied alien eyes with no visible bodies), and as an enemy, they're B-movie schlock.

The real enemy's within: despair over God's absence in the world. There's a fireside chat about belief—a particularly ineloquent low, thankfully interrupted by wolves—and later Ottway calls out a challenge to God, asking him for a manifestation of his presence right now. This comes after a particularly ambitious scene: one of the survivors simply gives up the ghost, choosing to sit and wait by a river for death. Having earlier talked a crash survivor through his last moments, Ottway must once again contemplate mortality. Carnahan plays the scene out in a distant long-shot, erring for once on the side of understatement. But the moment is as badly written as everything else in the film and its casually profane bluster falls flat.

Carnahan's nursed similar ambitions before. There's a cringe-worthy moment in 2007's Smokin' Aces where a hitman—not content to let his victim die in peace—smugly sympathizes with, "We're all dying." The Grey examines that sentiment with less black "humor," but Carnahan isn't very smart at philosophical dialogue, and Neeson's flashback reasons for living fail to convince—not only are we meant to feel heart pangs for his golden-light-lit wife, but also an awful, Matchbox 20-caliber poem his dad wrote ("Once more into the fray"). Action-wise, there's a tense sequence of rope ziplining from a cliff down into a forest, but otherwise Carnahan cranks up the noise and shock sounds to exasperating effect. The ending is goofily misguided, but most of this is just competent enough to skirt camp. Instead, it's just dull and leaden and embarrassingly earnest as it tries to spin Neeson's badass image towards something more worthwhile than beating up evil Muslims.