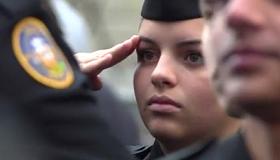 The Invisible War is that rare, issues-driven documentary that is so powerful it's apt to change minds. Directed by agit-provocateur Kirby Dick, the film is a detailed and impassioned survey of the widespread epidemic of sexual assault in all branches of the American military, and a full-throated attack on the feeble and ineffectual government response to so much broken trust and so many shattered lives. Stylistically, Invisible War is more workmanlike than most of Dick's previous efforts, but style isn't really the point here. Dick is out to move the audience, to inflame passions, and to push both citizens and the US government into action. He succeeds on all counts, creating a movie more likely to be written about on editorial pages than entertainment blogs. A respectable arthouse run is virtually assured, and don't be surprised if a real-world legislative push at the very highest levels of American government follows shortly thereafter.

Essentially a traditional talking heads and b-roll documentary, Invisible War is built on interviews with a wide range of military rape victims, focusing in especially closely on about half a dozen women. Their stories are all harrowing and similar: a patriotic enlistment, a deep initial sense of personal and professional fulfillment and then an unprovoked, often violent sexual attack, usually from a trusted military peer or even a superior officer. The statistics, which the film says are all taken from official government sources, are almost impossible to believe: according to Dick, perhaps half a million ex-servicewomen (and men as well) have been raped while on duty in the US armed services in the last quarter century alone, with over a hundred thousand rapes occurring in just the last decade.

The numbers are horrifying enough, but Invisible War brings us face to face with the psychological and professional carnage left behind. Much of the film details the broken world of Kori Cioca, a former Coast Guard enlistee who was beaten and raped by her superior, who went entirely unpunished. Devastated both physically and spiritually, Cioca suffered nerve damage in her jaw, and was so overwhelmed by the Coast Guard's indifference to her plight she eventually attempted suicide. Though happily married to a patient and loving spouse, Cioca suffers from post-traumatic stress disorder, straining her family bonds with screams in the night and an abiding phobia of men that extends at times all the way to her husband.

Cioca isn't the only servicewoman whose charges of sexual assault were dismissed by what amounts to an almost junta-like military justice system. Even the oily US government spokespeople who appear on camera admit that action on a rape report is taken solely at the discretion of a commanding officer, creating the ideal situation for cronyism and cover-up. Again, the numbers are appalling, with the vast majority of rape charges dismissed at the level of the first report, and perhaps only one in twenty charges leading to even the mildest kind of reprimand or punishment. And, as in the civilian world, many if not most rapes are never reported at all.

Invisible War culminates with a congressional hearing into sexual assault in the armed services that brings many of the film's hapless protagonists together for the first time. It's deeply moving to watch these women find strength in each other's company. Their relief at discovering they aren't alone, and the comfort they find in being truly heard, brings a moment of uplift to what is an otherwise relentless portrait of rampant and unpunished criminality, perpetrated under cover of military authority.

But if Invisible War makes anything clear, it's that the U. S. military is awfully good at spouting phrases like "zero tolerance" in front of legislators, while making no efforts at reforming a military justice system that is entirely broken when it comes to sexual assault. After more than a decade of US military adventurism and foreign wars, during which servicewomen and men have born virtually the entire burden of sacrifice, The Invisible War makes an impassioned argument that the greatest threat for many comes not from a foreign enemy but from within the military's own ranks. It's an intolerable situation, and one suspects if this film is as widely seen as it should be, there will be quite a clamor for the unequivocal justice these brave women have so far been denied.