close
Uncertainty is sexy at Brangwyn College for girls 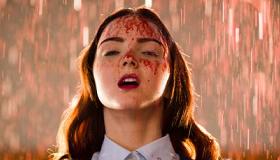 It's funny how genres change over time. In classic Gothic literature, vampyric fangs are symbols of erotic deviance; in contemporary Goth pop they're sex toys. Based on a young adult novel with hints of horror, Mary Herron's The Moth Diaries splits the difference and draws most of its sexy frisson from the ambiguity of black magic bedeviling an all-girls boarding school. Granted, it's clear from the start that the troubled teen protagonist has a vengeful undead classmate who means to swipe her best friends and taunt her to distraction, but what Herron sexualizes most effectively is her main character's uncertainty—the phantasmagoric moments all feel like jealous fantasies. With bubbles of nascent arousal frothing at the film's feminine surface, Moth Diaries' commercial potential is likely to hinge on whether or not audiences can stand to be confronted with the confusion they felt as adolescents.

At the start of the movie, Rebecca (Sarah Bolger) returns to the opulently pastoral Brangwyn College for her senior year, having spent most of the previous semester coping with the suicide of her poet-father. Soon after, however, Rebecca feels her once-sturdy connection with blondie bff Lucy (Sarah Gadon) slipping to the manipulative whims of dark, moon-faced newcomer Ernessa (Lily Cole). Ernessa's presence brings a portentousness that intensifies with off-kilter happenings—bad drug trips that culminate with expulsions from campus, clusters of moths in rooms, disappearing figures in the nearby forest—and, eventually, grisly deaths.

That Ernessa is some kind of malevolent spirit is not exactly questionable: We see spooky black-and-white flashbacks of her arrival at Brangwyn a century ago, and when Rebecca is frightened into a nosebleed in one scene, Ernessa dips a finger into a stray sanguine puddle and licks it. But since even these cues reach us through Rebecca's prism of sisterly spite, the tension of discovery is entirely personalized, a metaphor for the girls' incipient reproductive urge.

One secondary character loses her virginity halfway through the movie and shrugs the experience off, not having understood the appeal of the act or her appropriate place in the bodily exchange. Rebecca is similarly dumbfounded by the sight of Ernessa levitating in a courtyard outside her dorm with Lucy, who eventually falls ill to catalyze the sinister scheme at work. It's a reminder that coming to terms with one's sexuality often requires being initially nonplussed, and then anguished, at situations that seem overwhelming and bewitching. And gleaming in the background throughout is the temptation of alternative penetration—Ernessa dreamily dangles razor blades before Rebecca, daring her to mutilate herself as her father did.

The film is marred by its attempts to make that surreal horniness literal: A male English teacher (Scott Speedman) plays Rebecca's protectorate before far-fetchedly revealing his attraction to her, and a lesbian encounter between Ernessa and Lucy reeks of token girl-on-girl action. Harron successfully tethers us to Rebecca's experience throughout, but stumbles when sustaining this through the all-too-concrete ending—the denouement wants to be rhythmically open-ended in spite of its cathartic explicitness. But one can't fault Harron too harshly for continuing to underscore the problems in her source material; one of her directorial assets is the ability to adapt textual, as well as human, confusion. The most important lesson Rebecca learns is that the scare of doubt can be quite a turn-on.