close
Hail to the “Queen”

The Queen of Versailles 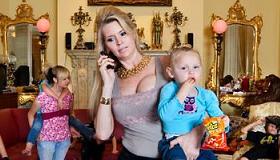 "The rich are different" F. Scott Fitzgerald once famously said. Well, yes and no. One wonders, for example, what Fitzgerald would make of director Lauren Greenfield's The Queen of Versailles, a humorous, character-driven documentary about the fall of billionaire timeshare king David Siegel that started out to prove the Fitzgerald thesis and then was overtaken by economic cataclysm. Magnolia Pictures acquired Queen right out of the gate at Sundance, and you can see why: Greenfield's fly on the wall view of obscene wealth punctured like a toy balloon is as current as a blog or a headline. Doc fans will love it, and who knows? Maybe a subatomic particle of the "Real Housewives" set can be persuaded by Greenfield's unbelievable access and the remarkable arc of her protagonists' lives to give this Queen a look. For a documentary in today's wobbly film market, you can't ask for better than that.

For roughly half its running time, it's obvious what The Queen of Versailles started out to be: a congenial if mordant look at a very wealthy man and his garish but likeable beauty queen wife as they create a new and improved version of San Simeon, William Randolph Hearst's insane architectural monument to himself. For gazillionaires David and Jackie Siegel, the half-finished monstrosity they call "Versailles" is to be the palace of their wildest imaginings. As planned, this "home" will contain a ballroom, an indoor tennis court, a 6,000 square foot master bedroom, a walk-in closet the size of a middle class house, and an entire "kid's wing" where the (many) Siegel children will be able to put on plays and recitals under a full-scale proscenium arch. At 90,000 square feet, Versailles is to be the biggest residence in America, and the pride of greater Orlando, FL., where David's timeshare condominium empire began.

As with many of America's more recent and lurid monetary dreams, the Siegels' dreams are based on lax banking practices and fiscal fantasy; their rude awakening comes in the form of financial collapse in 2008. Suddenly, David Siegel's business model is revealed as the bleeding edge of the Ponzi scheme that was real estate in the early 2000s, with his lower income clients using easy credit to take on luxury timeshares they can ill afford.

Siegel himself is leveraged beyond the breaking point, with star properties like his 55 floor Vegas-based Westgate Tower only half paid for. To make matters worse, Siegel has no wall of separation between his personal and business finances. When his base clientele starts defaulting en masse and the banks call on Siegel's loans, not only Versailles but everything the Siegel family owns starts to teeter on the brink.

As servants are dismissed and children raised in plenty are sent off to public schools, the Siegels' opulent lifestyle becomes a cluttered crazy house of litter, pet shit and dying exotic animals; naturally, a sudden shift of sympathies takes place. David, the congenial pater familias, previously filmed sitting on a gilded throne—a timeshare Richelieu in Hawaiian shirt—becomes haunted and unlikable. Obsessed by wasted electricity, dining alone in front of the TV set, he acts out with hostility toward the family he claims to adore.

Meanwhile Jackie, a seemingly frivolous creature, dedicates herself to making the best of a bad situation. Conditioned by her much older husband's atavistic values to be little more than a sexual trophy crossed with a spending machine, Jackie is inept and unschooled at her reduced way of life, as when she hilariously rents a car rather than a limo and then asks the puzzled Hertz counterman for the name of her driver.

Still, Jackie does her best to keep her family together, and also to understand and stay true to a husband grown cold and antagonistic under sudden financial duress. If Jackie can't quite give up the habit of "More, More, More!" it's because she learned it from the high-rolling master. But she has some other values at her core, and as she struggles to stay cheerful, to make sure David knows he is loved, and to plan for her kids' uncertain futures, she moves from being the easy butt of a rather obvious and somewhat cruel tonal joke to become the human heart of this story.

If we recast the Siegels' financial stresses and unraveling domestic equation in a middle class Mid-Western duplex, The Queen of Versailles could be the story of recessionary America, just written a bit large. Director Greenfield may have accidentally caught lightning in a bottle here—she never quite gives up the idea that she's chronicling an alien planet, populated by preening monsters of avarice, consumption and waste. But Greenfield is a shrewd enough filmmaker to capitalize fully on the break she's been given, and to understand how Queen of Versailles is actually at its best and most affecting when it demonstrates that, in fundamental ways, and contrary to Fitzgerald's dictum, the rich aren't really very different at all.