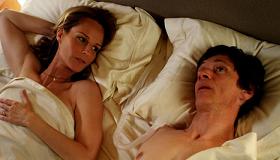 The 2011 Oscar nominations weren't even cold when 2012 set the standard for actor-driven cinema. The film was called The Surrogate at Sundance—it's since been renamed The Sessions—and it's a bawdy and quietly passionate biography of paralyzed poet Mark O'Brien, whose autobiographical chronicle of his attempts to have sex using a paid surrogate has been adapted for the screen by writer/director Ben Lewin with uncommon specificity and a bracing grace.

Lewin, who is handicapped himself, sees the classical sex farce inside O'Brien's predicament: a man who cannot move, but who is also possessed of a seeker's desire for the full range of human experiences, attempts to engage in the most sensual, bodily and (at times) ludicrous of human acts. Comedy is used to deflate the usual Hollywood evasions in dealing with the handicapped—there isn't a moment of pity, pious righteousness or self-congratulation to be found anywhere in this film. The laughs will draw a bigger audience than usual for an art title, which is why Fox Searchlight wasted no time in spending $6 million to buy up the worldwide rights at Sundance just hours after The Sessions first screened. But if the humor draws them in, it's the emotional honesty that will get people talking about The Sessions, and that makes this the rare recent indie likely to be widely appreciated and seen.

Central to Lewin's achievement is a towering performance from John Hawkes, now nudging Michael Shannon and Michael Fassbender for the title as best actor of the day. Anyone who saw Winter's Bone (or any number of recent indies) already knows Hawkes is both a master and a chameleon. But even Hawkes-watchers will be amazed by his transformation here.

O'Brien may be the most difficult part Hawkes has ever faced; the physical challenges are obvious. O'Brien can't move anything other than his neck, and Hawkes is literally never shown in any position other than a prone one. O'Brien also has severe breathing difficulties, and rather than simply fall back on some predetermined acting choice to indicate respiratory issues, Hawkes modulates and monitors every scene independently, so that there are days when O'Brien is hoarse and throaty, and other times when his lungs breathe more shallowly as the action progresses, as if winding down like a clock.

But even more demanding are the fierce contradictions in O'Brien's nature. A gifted poet, O'Brien is uncommonly droll and sophisticated when it comes to abstract thinking; Lewin's script is more than up to the difficult task of writing for so witty and language-driven a man. But physical sex is as unknown to O'Brien as it might be to the child he was when polio struck at him, and Hawkes' ability to simultaneously play terror, curiosity, desire and wonder—the naïf and the sophisticate—makes everything about The Sessions seem true.

Hawkes is ably supported by a flawless supporting cast, including a wryly humorous turn from William H. Macy as the hipster priest O'Brien bares his soul to. As the surrogate, Helen Hunt will be joining Hawkes among next year's Oscar nominees for her excellent and intricate embodiment of strength, professionalism and quiet yearning.

When love enters into the space between these two mismatched characters, it's messy, exhilarating and filled to the brim with all the complications the odd circumstance might contain. Hawkes and Hunt amuse us, delight us, and then flay us with their decency, their desire and their pain. If the story math seems a bit familiar (American films turn almost everything into a love story), the emotional journey is articulated with so much nuance, and such a vigorous belief in human possibility, that everything The Sessions touches becomes its own, and is made new.