close
Penn Is Where It’s At

This Must Be the Place 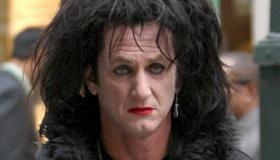 Italian director Paolo Sorrentino (Il Divo) makes his English language directorial debut with this oddly engaging story of an over-the-hill rock star who finds renewed life in seeking a Nazi who humiliated his late father during World War II. With a sure-to-be-talked about performance by Sean Penn and the dueling themes of overcoming depression and revenge against Nazi atrocities, This Must Be The Place is anywhere BUT the place for moviegoers who aren't in the mood for something different. For those who can get with the program, Sorrentino's audacity and Penn's go-for-broke portrayal could be the ticket. With some key reviews box office could be okay on the arthouse circuit for The Weinstein Company, but reach beyond arthouses is unlikely. Picture debuted in Official Competition at the 2011 Cannes Film Festival where initial reaction was decidedly mixed.

With stringy, black hair that borders on a fright wig Penn throws himself in with his usual abandon playing Cheyenne, a one-time 80's glam rocker whose life and career came tumbling down after two brothers committed suicide and credited his lyrics with the idea. Cut to twenty years later, the goth-y rocker spends his days wandering his vast Dublin mansion (he apparently invested wisely) speaking in mumbled, halting tones to his long suffering wife (Frances McDormand). Penn resembles a downer Ozzy Osboune, but his interpretation is actually based on The Cure's Robert Smith. At first the portrayal seems like a jokey Saturday Night Live sketch but through Penn's skill and courage as an actor we soon see this is a man in the throes of unrelieved depression and boredom, a childlike existence for a 50-year-old man who has forgotten how to live. As he is befriended by 16-year-old Mary (Eve Hewson), Cheyenne's number one fan, and helped along by Mordecai (Judd Hirsch) who tries to bring him out of his funk, Cheyenne finds new purpose in coming to America to hunt down an aged Nazi (Heinz Lieven) and finish the goal his late father couldn't.

Sorrentino perhaps bites off more than he chew, cinematically speaking, but it's an interesting attempt and one of the more indelible portraits of depression seen onscreen. What lifts the film is the terrific score by David Byrne who appears as himself and has crafted some of his most memorable tunes including the rich title song that sets the tone for the film, title and all. Although the performances are all fine, particularly McDormand, Hirsch and Levien, the film obviously belongs to Penn who took a big risk playing this in such a vivid style. Affecting a strange accent and avoiding mannerisms that easily could have sunk a lesser actor, Penn creates another unforgettable member of an ever-growing list of unique characters.