Under Fire: Journalists in Combat 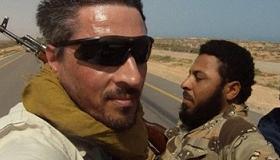 Produced with an artistry so poor its location on the Oscar shortlist is almost shocking, Under Fire uses primitive technique as a badge of honor and earnestness—it's innately unpretentious, and so desperately literal it can't aim for the sort of visuals that make docs poetic. But this is one of the super rare docs that packs an unbelievable punch despite its misguided aesthetics. It's a strange triumph of content over form, which is the province of journalists to report. Every image says: "forget if it's pretty, is it happening?" If the answer is "yes" then the world should know. Box office receipts aren't big, even for a doc, but the Oscar pedigree will certainly help.

Director and war correspondent Martyn Burke interviews fellow journalists from Reuters, New York Times and CBC and the results are harrowing. John Steele, badass among badasses, talks about the sense of guilt that war correspondents can't escape when a disaster and their nearly simultaneous representation of it somehow birth the event—as if lending unthinkable horror a description makes it real. Steele's darkest story involves a little girl who waited outside a store for him to bring her candy when a bomb dropped—naturally he worries that if he hadn't promised her anything she might have survived. The work of a correspondent is understandably trenchant and the psychological toll of seeing and, in some cases, influencing a tragedy is endlessly damaging. Also, a degree of glory hogging is part of the job description—and the lure. One journalist became a legend by driving around in a "soft car" (a vehicle without protective gear) and with a sign reading "Don't Waste Your Bullets, I'm Immortal." While that journo's hazardous adventures left him unscathed, he expressed his greatest power taking his own, very mortal, life. In contrast, the warm-hearted hero of this doc is Paul Watson, a man who won a Pulitzer for a photo he took that changed foreign policy. He was born with one hand and says he has something to prove, but of all the ego-mad, adrenaline junkies, he's the one Burke follows back to Afghanistan—a trip Watson finances himself without assignment—to show him as an undocumented ambassador of good will and effective change. All this is independent of his "day job," but then, what's a day job?

The conviction these reporters feel to serve is often fueled by a nearly maniacal addiction to the rush of the job—one wonders if that compulsion was a part of the job description when the gig was safer. Opening intertitles tell us that we lost two journalists in WWI, 63 in WWII and in the last 20 years we've lost around a correspondent a week. That's a death toll in the thousands. True: we didn't have as many correspondents in the field in WWI, but historically our war correspondents were were protected entities—something anyone working in publishing today will hear and feel in their guts—today's journos are all shooting without a net and health insurance is hard to come by when your job involves Kevlar. The interviews with female reporters were particularly interesting; while men came home from duty to find their world full of oppressive memories and maddening trivialities—some will argue this is Post Traumatic Stress Disorder, others will call it the natural effect of witnessing trauma—the women came home to the garden-variety guilt of the working mother, which resembles John Steele's bombed child waiting for candy. Naturally priorities change from interviewee to interviewee, which is a major point of intrigue for this doc: everyone's experience is horrendous but each person's management of the experience is undeniably unique.

The pressure to report fairly is given a small stage, which is a shame but it's not surprising. The battlefield of documentary representation is a largely philosophical one, and often explored in figurative or poetic terms. That's the kind of inquiry Burke is happy to leave for those with the luxury to afford it. But for this true-blue and partially power-pointy documentary, life is valued above all and bullocks to the talkers. There are real wars going on out there.