close
Stick a stake in it already. 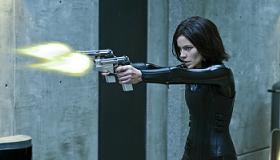 Kate Beckinsale can still fill out a skin-tight leather bodysuit, but with Awakening, the vampires-vs-werewolves Underworld franchise has finally decayed beyond the point of repair. After a third outing, 2009's prequel Rise of the Lycans, in which she chose not to participate, Beckinsale returns for this fourth installment as badass vampire assassin Selene, who awakens from a twelve-year cryogenic nap instigated by evil Dr. Lane (Stephen Rea) to discover that her love, wolf-vamp hybrid Michael (Scott Speedman), is dead, humanity has largely eradicated the two warring supernatural races and she has a hybrid daughter (India Eisley). On the run with the girl, Selene teams up with a batch of generic bloodsuckers and a cop, Sebastian (Michael Ealy), whose purpose in the story is to provide laughably convenient information and assistance to Selene at the precise moment she needs it. If plotting is slipshod to the point of outright silliness, the action, now orchestrated by directors Måns Mårlind and Björn Stein, remains the same mixture of spastic CG, plentiful gore, sub-Matrix slow-motion effects and darkness, darkness, darkness. Still, given the series' undying popularity—due largely to its star's killer-dominatrix sex appeal—moderate box office success seems predestined.

Acclimating to a new world in which vampire and lycan teeth are now sold in army surplus stores and her hairy rivals, pushed to the point of extinction, now scrounge for survival in the sewers, Selene finds refuge courtesy of a hunky vampire (Theo James) whose father (Charles Dance) prefers cowardly hiding to violent human confrontation. Selene's arrival at their coven immediately sends things into chaos, peaking with a siege by a horde of giant snarling werewolves led by a behemoth seemingly immune to silver. This development troubles Selene, but far more troubling are the gaping plot holes that soon begin piling on top of each other—such as, for example, the fact that a fifteen-foot beast has somehow managed to infiltrate an underground lair apparently accessible only via a tight manhole-sized entrance. Awakening means to glide over such illogicalities with hectic pacing peppered with endless slow-mo images of Beckinsale leaping, spinning, kicking, cracking limbs and strutting about, arms outstretched, with her signature automatic pistols. Yet such commotion leads to little actual excitement, with most skirmishes doused in the series' trademark blue-black murkiness, and their staging undone by frantic camerawork that never allows for a clear, sustained shot of the villainous werewolves, thereby making them seem hopelessly insubstantial.

Mårlind and Stein's drooling cinematography underlines Selene's invincibility, and every other peripheral character is a half-formed cipher devoid of complexity. Couple those shortcomings with a script-by-committee that never shows any interest in creating compelling drama or even a set piece of any inventiveness—the film's battle-heavy centerpieces are all set in dull subterranean dens or steely corporate hallways, elevator shafts and garages—and Awakening proves merely another in a long (and growing) line of films driven only by a desire to elicit a temporary adolescent "whoa!" at its supernatural spectacle. That it can't even manage that lowly feat doesn't say anything about Beckinsale, whose undead-Catwoman Selene continues to be a reasonably alluring icon of lethal sexuality. But it speaks volumes about this increasingly pointless franchise as a whole, which at this point seems incapable of doing anything but repeating itself (replete with a car-attack sequence that closely mirrors a similar one from Underworld: Evolution) while providing terror only via its vision of a near-future society perpetually drenched in eye-searing, seizure-inducing strobe lights.