Watching TV with the Red Chinese 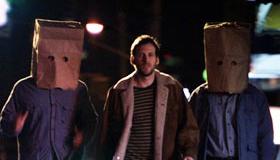 The collegiate compulsion to discover our interconnectivity is rendered in stunning clarity in this indie by Shimon Dotan. Based on the book by Luke Whisnant, Watching TV with the Red Chinese takes place in 1980, as post-grad Dexter (Ryan O'Nan) befriends his Chinese exchange student neighbors. Rendered in flashbacks that move through time in potent bursts, the Chinese trio act in inadvertent unison, castigate each other for becoming American and fraternize (oh, do they fraternize) with Dexter's old flame. The romance is almost a red herring because the issues these highly intelligent but culturally naïve exchange students wrestle with are so grave and so simultaneously hilarious. Dressed like a communist propaganda poster, in blue uniform shirt and jeans, the three wear paper bags over their heads to a Halloween Party: en route one stops everything to take off his bag and say, "Dexter: stop calling us "Red Chinese," there is only one China and people from China are Chinese." Then he reapplies his accidentally ironic costume and amps up his convicted gate. The events, along with the lessons they yield, aren't lessons we're meant to remember for parts of the story to come—each sequence bears a strong sense that its delivery matches its meaning. Just as the film's pretentious and uninventive filmmaker extolls, "Narrative is a farce" and "the medium is the message." (Marshall McLuhan's name is called out, silencing the almost plagiarist.) So Watching TV is less a story loosely bound by cause and effect than a kind of scrapbook of memories, all of which convey the concerns of being super smart and mostly confused in a culturally mixed Manhattan, circa 1980. The affection is sweet and precise, if even the terms we use to define them aren't.