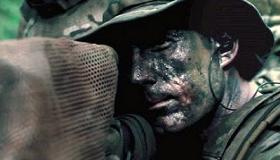 The main selling point of Act of Valor is that it's a military action picture starring actual Navy SEALs. Filmmakers Mike McCoy and Scott Waugh initially set out to make Navy-approved recruitment videos and they transformed their effort into this feature film, which shows remarkable access to military materials and personnel but, as a film, is unremarkable every other way. The producers' access may have helped production values—an aircraft carrier here, a nuclear submarine there—but it doesn't improve the storytelling. Box office should be strong given the film's wide opening, extensive marketing and cross promotions (everything but McDonalds' Happy Meals namedrop the film) but once the weakness of the story is clear all that's left are "real maneuvers" and people don't buy tickets to watch movies they could see in recruitment centers for free.

A group of Navy SEALs—the elite fighting force much in the news following the killing of Osama Bin Laden—are deployed overseas from their home base in San Diego to rescue a American agent captured by drug lords. Information recovered from the mission puts the team on the trail of international terrorists determined to strike within the United States.

The movie is an odd and interesting experiment. If you walk in knowing nothing of its origins/production story, it just seems like a throwbacky B-movie action junker. However, if you're aware it was made with actual soldiers it becomes a fictionalized documentary of self-perception, a glorified version of the military's best-case-scenario image of itself.

But Act of Valor is not a documentary and is still intended to be a proper narrative feature. (It's standing as a recruitment film may be a matter for debate.) It may come as little surprise that the active duty Navy SEALs who star in the film are terrible actors. Every time the action pauses for a scene of brother-to-brother camaraderie or a heart-tugging evocation of family life back home, the film completely deadstops.

The filmmakers have made it known that they shot action scenes in which the SEALs were firing off live rounds of ammunition. As in actual bullets. This may theoretically provide a certain air of authenticity but serves no actual, discernible purpose. You know what the scenes with live rounds look like? A shoot-out in a movie. And the vagaries of this production—a reliance on first-person point-of-view, sometimes shooting with small DSLR cameras—likely influence the movie's tone and overall sense of energy as much as perceived realness of the SEALS and their live bullets. McCoy, Waugh and whoever else is responsible had to realize at some point that making something feel real in a movie has nuts to do with live ammo or real SEALs.

The film then becomes something of an inadvertent investigation into the importance and meaning of authenticity. There's a reason the most memorable characters are the villains (played by actors Alex Veadov and Jason Cottle), childhood friends who have gone down different paths, one now a businessman with luxury tastes and the other an idealistic zealot.

Taken as a film, Act of Valor is something like an updated version of the 80s Cannon-style action picture: grubby and aching to get back to the guns. The essential packaging concept—Real Soldiers! —is a curiosity, not an actual added value.