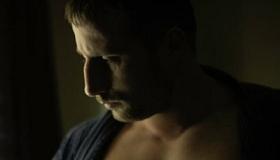 A bonafide hit on the festival circuit and now an Oscar nominee for Best Foreign Language film, Michael R. Roskam's Bullhead is an impressively dark and well-crafted crime tale about, of all things, cattle farming and "the hormone mafia underworld." Starring Matthias Schoenaerts as the titular bullheaded one, a Belgian cattle farmer who is pumping both his bulls and his own veins full of black market steroids, his Jacky Vanmarsenille is a study both in restrained rage and the lasting effect of damning secrets. Positive festival buzz, paired with the arthouse crowd's eagerness to check out the rare Best Foreign Language film before the Oscars air should give the film a solid cinephile audience.

Roskam's film opens on a quiet, uninhabited forest, with Schoenaerts' Jacky speaking via voiceover in an uncharacteristically verbose and clear manner. He's telling us about memory and its sticky persistence, how things are not spoken of, but not forgotten, and how, eventually, everything comes back to you, bringing with it one message—"you're f--ked." And Jacky Vanmarsenille is, unfortunately, as screwed as he believes.

A taunt and twisty crime tale, Bullhead is set in Roskam's native Belgium amidst the shady world of cattle farming and beef trading, industries infested with illegal steroids and the exploitative men who deal in bulked-up meat. Jacky runs his family's farm, one that's been using steroids to punch up their bulls since he was a just a lad. But it's not just the bovines at the Vanmarsenilles' farm that are getting the juice—Jacky is injecting himself, too, and all that latent roid-rage won't prove helpful when Jacky and his vet get tangled up with West Flemish beef traders that don't play nice. As if that didn't already sound like the recipe for a volatile situation (and it is), that gang of ruthless Flemish is rounded out by someone very familiar to Jacky: Diederik Maes (Jeroen Perceval), an old enemy who knows more about Jacky than anyone would be comfortable with.

The source of Jacky's rage and the reason for his reliance on steroids is revealed in a protracted flashback sequence that harkens two decades back. Jacky's childhood trauma implicates not just Diederik and his father, but also another local family that maintains a hold on Jacky that's deeper and more complicated than it first appears. Schoenaerts' performance is the most impressive part of the already-impressive Bullhead. To portray Jacky, the actor reportedly gained 60 pounds (thankfully, diet and exercise). His Jacky is a different take on the roid-head than most audiences might expect. Rather than constantly raging, Jacky is skittish, unsure, droopy-eyed. The same steroids that make him lash out in horrifying ways don't give him confidence, particularly in interactions with the fairer sex.

On its surface, Bullhead is a film about crimes and criminals, made more epic (and much more powerful) by virtue of its sense of history, fate and honor. The greater story of the film (the inherent self-centeredness of crime) is effectively and masterfully set against the egotism that fuels Jacky's excessive steroid use.

Bullhead should be (and has already been, in some circles) hailed as a modern crime classic, but Michael R. Roskam's film is also much more than that. A twist on mafia flicks, a family drama about destiny and the reach of history, a horror about personal tragedies—each element is meticulously woven into Roskam's production. Elevated by an outstanding performance by Matthias Schoenaerts, Bullhead proves to be one of the Academy's most worthy nominations this year.