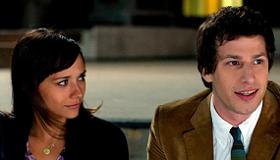 This movie will not find an audience. It's got likable stars, a reliable commercial genre and a decent supporting cast, but nobody will turn out to see it, even if it was a labor of love.

But then, you've heard it before: Life isn't fair.

It isn't fair that Rashida Jones doesn't get to be Jennifer Aniston, queen of the contemporary romantic comedy. Jones is attractive and likeable, and as an actress, she's got range in the same way Karen Allen used to be able to play it funny, sexy and serious all at the same time. And like Allen, whom Jones somewhat resembles, Jones has sharp but retractable edges, which as far as the demands of contemporary romcom go means she's overqualified for all the big parts.

So why do Katherine Heigl, Reese Witherspoon and Kate Hudson get their shots at the romcom title, but not Rashida Jones?

It also isn't fair that Andy Samberg doesn't get to be a movie star. He's been one of the funniest things on TV for a long, long time. He's got what ought to be a career-making showcase on Saturday Night Live. His duet with Justin Timberlake on "Dick in a Box" remains maybe the funniest novelty track since Adam Sandler's "Hanukkah Song." But somehow, Samberg doesn't translate for movie audiences the way Sandler always has.

Why? Because life isn't fair.

It also isn't fair that Jones and Samberg—establishment stars, after all—got to attempt to redress these professional issues via the Sundance Film Festival this year, with a painfully thin, completely unadventurous, formula romantic comedy called Celeste and Jesse Forever. Jones is the motivating force here: she's in every scene and she's credited as the primary screenwriter. It's her movie all the way, her push to show the Hollywood powers that be that she can quip and pratfall and "grow as a person" with the best of them. And she can. She's good; at ease in front of the camera, fun to watch. Though the dreary "high concept script" she's playing in— the story of a divorcing husband and wife who are "best pals" and can't make the break till life forces the issue— hardly tests her or anything else, other than the audience's patience.

What's unfair here is forcing audiences who have come to a very remote place allegedly in order to be challenged and surprised by hot independent visions to sit through a movie that does not aspire to be anything other than the most routine type of mainstream schlock. What's unfair is passing off what amounts to a reel piece for Rashida Jones as representative of anything other than that the actress (who is the daughter of uberproducer Quincy Jones and actress Peggy Lipton) is very well connected.

Say what you will about Hollywood romantic comedies, they usually at least contain enough forced, industrial cheerfulness to make the time pass. Celesete and Jesse clocks in at just 91 minutes, but the crummy production values, flat staging and redundant plot points make it feel much longer. It would be a failure if watched on a plane or in a mall. At Sundance, it is inexplicable. And someone ought to tell Andy Samberg that shackling your comedic gifts to play a docile mensch does not constitute range.

Somewhere out there, some talented kid with a DSLR camera just made his or her dream film. It took a lot of struggle, maybe a reckless expenditure of personal resources. It's rough around the edges, but it's got something special—a way with actors, an unschooled approach to story that somehow turns out fresh and unique. Audiences would be divided if they got to see it, but challenged also. And getting it before the public would help this promising new voice grow in his or her craft.

It's exactly the kind of movie Sundance ought to program, in other words, but it failed to get in this year.

Why? Because Celeste and Jesse Forever took its slot, thanks to a back channel phone call, or because Andy Samberg looks good on a red carpet.

And because life isn't fair.