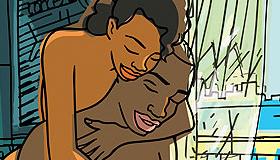 More than 20 years after helming Belle Epoque, which won the Academy Award for Best Foreign Language Film, director Fernando Trueba finds his work on the Oscar short list again with Chico & Rita, his first animated feature. Trueba and co-helmers Tono Errando and Javier Mariscal have created a visually sensual and aurally unimpeachable ride through various post-war musical forms, most importantly Cuban jazz. The blistering tunes and unique animation compensate for the rather unconvincing central love story that works best as a Forrest Gump-ian device to highlight some legendary real-life musicians. Chico & Rita's recent Oscar nod for Best Animated Film should net some additional convertible pesos with adult fans of animation, a forgotten demographic in the age of Pixar. In ancillary, a combo rental of Chico & Rita and Buena Vista Social Club is guaranteed to send any music lover into orbit.

Indeed, it would be a shame if the young-uns opted out of Chico & Rita for its lack of Pixar pedigree, kid-friendly critters and show-off CGI. Especially since the animation for this period tale was actually created using decidedly 21st century means. The movie was initially shot with live actors whose movements became the basis for traditional 2D animation that was subsequently augmented by the ultra smooth camera moves that only computers can provide. The result is a riot of colors with a throwback feel, as hues bubble, explode and sometimes bleed over the confines of their edges. The only downside to this otherwise eye-catching approach is its lack of character detail, denying us sufficient connection to our heroes. With the sexy exception of a pre-fame Rita gently hiking up her yellow dress as she dances, the lovers of the title aren't provided the facial expressions and behavioral specifics that make animated creations come alive. It's not fatal, but it hurts since everything surrounding the drama-filled duo is so wonderful. Chico (voiced by Emar Xor Oña) is a handsome, young piano player in Batista's Cuba who spies the Jessica Rabbit-shaped singer Rita (Limara Meneses, with Idania Valdes singing Rita's songs) at a nightclub. The two fall hard over the course of the evening, which ends in Chico's bed. When Chico's blowsy girlfriend intrudes the following morning, Rita rushes out. After briefly reuniting to compete in a radio contest, the pair separates, only to cross paths repeatedly over the next approximately 50 years under circumstances that are sometimes dramatically iffy.

What their long-term sputter of a relationship allows is for the audience to grab an earful of amazing music, which was overseen by Grammy-winning Cuban pianist Bebo Valdés. The name-dropper script by Trueba and Ignacio Martínez de Pisón performs double-duty as it demonstrates the career heights achieved by Chico and Rita, while also motivating the musical numbers. In Havana, Chico's piano-playing career gets a boost after being pressed into emergency service by Woody Herman's band. After Rita goes to New York to find fame as a singer, Chico eventually follows, bearing witness to Charlie Parker and playing with Dizzy Gillespie and Tito Puente. As musical omnibus, the script works to the point where it even manages to include the 1948 drug-related murder of Chano Pozo. As character piece, it works less, with its tossed-off mentions of Cuban and American socio-political upheaval and tiny hints of female objectification (does a naked woman catfight for a man's favor anywhere in real life?).

Its failings aside, Chico & Rita is a work of warmth and affection, a colorful evocation of a time and a musical environment redolent of artistic sophistication and the prospects of post-war recovery. It's the story of how American jazz was introduced to the power of Cuban jazz, a mutually beneficial melding advanced by, and experienced through the eyes of, two near-miss lovers. If Chico & Rita's emotional core can't be found where the filmmakers intended, that hardly means the movie doesn't have one. Instead, its heart emerges from the flying fingers, firm embouchures and uplifting voices that energized the nightclubs and dance halls of a bygone era, floating through the decades and still refusing to land.