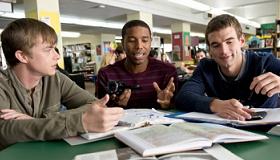 High school dweeb Andrew Detmer (Dane DeHaan) has a dying mother (Bo Peterson) and an abusive, alcoholic dad (Michael Kelly). His cooler cousin Matt Garrety (Alex Russell) tries to get Andrew to embrace the usual high school social activities of partying and drinking, but Andrew prefers to hide behind his video camera. At a rave, popular Steve Montgomery (Michael B. Jordan)—a friend of Matt's also serving the part succinctly dubbed "token black guy" in Not Another Teen Movie—asks Andrew to take his camera and join them underground, where a barely-seen crystal glowing thing gives them bleeding noses and telekinesis. The former should be a sign that the latter will prove to be bad news—but which kid will be the one to succumb to the temptation to take their powers too far and act like a complete jerk? A messy if initially intriguing take on sci-fi-underpinned high school angst for the vlogging age, Chronicle eventually grows repetitive and stale. Still, as far as the recent spate of found-footage genre films goes, it's top-end compared to the likes of The Devil Inside. Despite the low budget and non-famous leads, audiences may well respond to this brisk, topical drama.

Set in Seattle but sporting a very stereotypically Los Angeles sensibility, Chronicle initially unfolds from Andrew's perspective: in the first shot, he's pointing the camera at his door, he and it both reflected in a mirror that shakes from his drunken dad's knocking. Home life is bad, and school's no better. The cheerleaders ask him to stop creepily filming their practice while the bullies don't ask, they just tackle. Andrew's a virginal sad-sack (just to confirm it, the dialogue notes he used to walk around in a "gray hoodie"), but he's got a raw deal at home, so the film seems to be cutting him some slack.

At the party, before the boys go underground, the token romantic interest is introduced: Casey Letter (Ashley Hinshaw), a camera-wielding blogger who's the only person who understands Andrew's urge to compulsively film everything. (In the YouTube era, it's hard to believe teens would be so freaked out by Andrew's compulsive self-documentation.) But Casey isn't his—instead, she's the object of Matt's affections, even though she's unamused by the stoner's inexplicable habit of randomly quoting Schopenhauer or Jung. Eventually Matt sees the error of his ways and ditches his pretentious affectations, renouncing such habits on Casey's porch and winning her heart, thus setting the seeds of the film's not-so-buried subtext: embrace normalcy and fear nerds, for they are angry and volatile.

(The next two paragraphs discuss the rest of the plot in detail: skip to the last paragraph if you want to go in pure.) Chronicle makes the choice to side with the jocks and well-adjusted popular kids rather than the outcast, an underused dynamic in genre films as they tend to be made by-and for-geeks. Star Wars makes cameo appearances in the form of a musical cue during a levitating-the-legos sequence and a few lightsabers, and Andrew's this film's Anakin Skywalker, a sympathetic kid (at least theoretically—he's a bit of a whiner) who succumbs to the dark side. The first half where the three new friends experiment with their new powers is fun, complete with an obligatory flying-through-the-clouds sequence. Rather than brood in superhero-y angst like Peter Parker, they're goofily amused by themselves. And, as a bonus for the director, Andrew learns how to levitate the camera, freeing the film from its found-footage visual limitations.

As tragedy looms, the film gets untenably, inadvertently silly, with Andrew darkly brooding about "apex predators" after a humiliating sexual initiation. The climax is endless—the monster fails to die one too many times, with the film finally abandoning the pretense any of the characters are actually filming. Explosions and weightless fighting are less impressive when viewed from silent black-and-white surveillance cameras, making the end a dull, Cloverfield-esque roar of cheaply rendered destruction. Andrew seems less like a tragic victim of hubris that kind of an annoying, self-absorbed jerk—his sullen black hole of self-hatred eventually swallows the movie whole.

The combination of a main character's jaundiced perspective and some cool floating camera moves keep the first half of Chronicle lively if silly, with its fears about overdocumentation and an inability to directly engage the outside world in the digital era not that far off from a film like Afterschool. So Chronicle is Afterschool with telekinesis—as silly and unstable a hybrid as you'd expect, but still goofily compelling, at least, for a while. Like Matt as he smugly quotes philosophers like a overly-self-impressed autodidact, the movie isn't as smart as it thinks—and once it's time for tragedy, it loses its touch entirely.