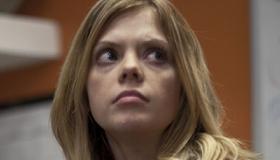 Potent and polarizing, Craig Zobel's Compliance was perhaps the most controversial film at Sundance 2012, with responses ranging from charges of pornography to declarations of a new masterpiece. Compliance is neither, but if I had to pick a side (and it's a movie that makes you pick sides) I'd come down a lot closer to the latter than the former. The audience for this movie will have to be an adventurous one, and even then a substantial portion will be outraged by what they see. But controversy and word of mouth are close relations, and this is likely to be a film that gets talked about. Compliance will need sensitive handling, but it's a reasonable bet for the right indie distributor, and a film you'll be hearing more from.

The action unfolds like a play, most of which is set inside a fictitious fast food restaurant called Chickwich. It's a rough day for boss lady Sandra; the kitchen's out of bacon, there's a "secret shopper" from corporate lurking in the evening rush and somebody spoiled $1,400 worth of food by leaving a freezer door open. The last thing Sandra needs is another problem.

Then the phone rings. The voice on the line says he's a cop named Officer Daniels. It seems one of Sandra's countergirls has stolen money from a customer—the blonde girl, he says. The cute one. "Becky?" Sandra asks. Officer Daniels agrees—Yes, Becky. Could you go and get her please....

From that small piece of information, the caller quickly establishes trust as well as his own authority over a vague but serious "criminal investigation." He's articulate, he seems knowledgeable, and he's very persuasive. He needs Sandra's help—his officers are all out on calls. Can she search Becky's purse for him? Can she search Becky's clothes? Still no sign of the money? Well then, perhaps more extreme measures are called for...

Anyone familiar with the name Stanley Milgram will understand what comes next. Milgram famously devised an experiment to gauge how far a subject would go beyond normal thresholds of behavior if convinced they were doing so to assist an authority figure. In Milgram's case, a white jacketed "doctor" asked a volunteer to turn a dial that sent an "electric shock" into another human being (an actor actually, who was not in any danger). The doctor insisted the volunteer gradually increase the voltage even after the "subject" became agitated and begged for the procedure to stop.

65 percent of Milgram's subjects continued with the experiment all the way to the point of administering what they thought was a lethal 450 volts of electricity. Milgram's purpose: to establish the roots of Nazism, and how ordinary people were persuaded to commit its atrocities.

In Compliance, sexual deviance is at the core of the "experiment" of the mysterious caller, and this accounts for the angry reactions the film has provoked from its very first screening. Zobel and his producers have tended to defend themselves by falling back on the fact that Compliance is based on a true story, and while that makes the movie more intriguing, it's also a nonsense argument. With a film, execution is all. Psycho and The Texas Chainsaw Massacre are wildly different viewing experiences, even though both are based on the serial killer Ed Gein.

The question is really one of whether Compliance is exploitive or serious-minded, and that's an easy one to answer. Zobel, who both wrote and directed the film, handles his difficult but ultimately rather important subject matter with a remarkably controlled and steady hand. Where a pornographic film might ground itself in fantasies of gratification and submission, Compliance is all austere, fluorescent realism—discreet when it needs to be, and about as erotic as a visit to the proctologist. Only someone who's never seen pornography could mistake Compliance for anything other than an artfilm masquerading as a suspense picture. Anyone who wants to stop this film from being seen is just shooting the messenger—another manifestation of the inglorious American tradition of trying to keep films from showing the dark side of human behavior too realistically.

I'm impressed by Compliance in many ways, and I think it has something to say, but I also don't entirely buy into it. There's something very studied about Zobel's approach—a hyper generic quality to both the casting and his use of locations that seems carefully and even manipulatively designed to drain specificity from the story. As Sandra, stage actress Ann Dowd is brilliant at seeming typical—the epitome of every dowdy, middle-aged woman who ever felt overlooked by the world. Dreama Walker's Becky is a typical movie teenager: boy crazy, cellphone addicted, sassy enough not to seem like a pushover, or in this case, an easy target.

Though all of the main performances are brave and proficient, Zobel refuses to provide his actors with any detail that might affix a shard of specialized motivation to a character. It's an effective gambit, in that it keeps Compliance firmly in the realm of allegory—a bunch of anybodies, in Anytown, USA, who prove capable of anything. But it also strikes me as a failure of nerve, as if Zobel doesn't want to go all the way into the abyss he's chosen to examine. If we could see inside these people, even a little bit, this chilly and upsetting movie would be not just fascinating but truly devastating, because the real horror is somewhere deep inside them, in the core of what they aren't and are. That movie might come even closer to being truly unwatchable, but it also might really deserve to be called "masterpiece."