close
A searching indie about boyhood 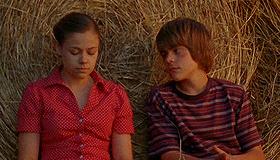 Named after the one guy Julius' father seems to admire, this regional coming of age drama is the sort of indie-breakout we hardly see anymore. It's full of really subtle dichotomies and internal conflicts, but what makes Julius' story seem authentic is how totally incongruous it feels. Julius is great at science-he studies the asexual reproductive properties of worms-and this little Darwin can't see a lick of sense in the habits of the humans around him. His father left the family for reasons unexplained, which leads the whole town to call his dad a homo, and his mother (Jill Blackwood) is dating an administrator from his school so it's hardly safe for him to ask questions. Mom's a taxidermist which is eerily comparable to the habit of her father-while he's married to Betty Buckley (amazing, she provides the film's greatest moments) he goes on tending to the needs of a dying ex-lover. There are dead animals all over Texas but more than dead animals there are worms-creatures savvy enough to grow a new end if theirs has a tear-meanwhile we go about screwing up and trying to run away whole instead of cutting our losses or managing our own tears. Indie vet Robert Longstreet is in this and his name is reason enough to watch—forget his command of screen, he puts his faith in the films he works on and that makes you believe—funny enough, he plays a fishy minister here. But in the middle of a story about a boy ambling to find rhyme/reason for the misdeeds of his elders, you get the half-blind sense of searching so right you feel like you forgot what "genuine" felt like before this. It's not just the little film that could, it could be the last honest movie in Texas.