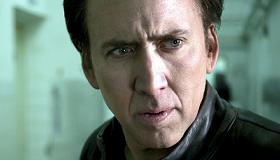 For a story about a guy with a flaming skull for a head, the first Ghost Rider film was incredibly forgettable. But if there's anyone who can tap into the character's nutso mythology, it's the directing team of Mark Neveldine and Brian Taylor (Crank, Gamer). The duo sees cinema as an extreme-sports competition, making them perfectly suited to bring a bad ass biker to life—especially if he's played by Nicolas Cage. So it's a half-certainty, half-shock that Ghost Rider: Spirit of Vengeance is both good and bad, a sequel that's hungry for thrills but bereft of the cohesiveness—and budget—to be a full meal. With no direct competition this weekend, box office prospects are strong, but expect it to have legs only among diehard fans of the characters, or forgiving seekers of empty-headed thrills.

Reprising his role from the first film, Nicolas Cage plays Johnny Blaze, a former stunt biker transformed into "the spirit of vengeance" after literally making a deal with the Devil. Despite seeking isolation in Eastern Europe, Blaze unexpectedly finds himself pursued by an alcoholic priest named Moreau (Idris Elba), who rather than trying to stop or destroy Ghost Rider, offers to separate the man and the spirit in exchange for rescuing a kidnapped boy named Danny (Fergus Riordan). Teaming up with Moreau and Danny's mother Nadya (Violante Placido), Blaze unleashes his inner demon—literally—and begins looking for the boy. But when he discovers that Danny is being held by the Devil's earthly emissary, Roarke (Ciaran Hinds), and a supernatural foot soldier named Ray (Johnny Whitworth), Blaze is forced to choose between liberating himself from the spirits that torture him and protecting the boy from certain death.

By now, a Nicolas Cage freakout isn't merely an inevitability, it's one of the few things to look forward to in his many, many movies of wildly uneven quality. In Spirit of Vengeance, Cage offers plenty of howlers to keep audiences off-guard ("He's scrapin' at the door" is destined to become a classic), but the actor proves more predictable than in other recent efforts, and in fact, he almost plays the straight man in this wild world—sometimes even to himself. The script by Scott M. Gimple, Seth Hoffman and David S. Goyer both mythologizes Ghost Rider and takes the stuffing out of him, allowing Cage's quirky performance to not only shine through when his head's been replaced by a fiery skull, but also during mundane expository scenes, even if it's just delivering a line like, "No, I get it—you're the Devil's baby mama."

That said, the film's momentum is wildly uneven. After starting with a sequence that makes almost no visual or logical sense, the viewer is thrown into the middle of a set piece without any orientation whatsoever—it's understandable if some moviegoers tune out of trying to make heads or tails of the action. It certainly doesn't help that other than the lead roles, virtually every character is played by a same-looking, nondescript Eastern European douchebag. Even with a back story as singular as the title character's, however, Gimple, Hoffman and Goyer somehow managed to write a script that feels cobbled together from remnants of Terminator 2 and Superman 2, without the former's dramatic gravitas or the latter's romanticism. And then there's the question of how a person with the ability to decay anything he touches could retrieve a boy without turning him into a pile of ashes.

But the set pieces are really cool (say a scene at a quarry where Ghost Rider turns a tractor into the digging machine from hell) even as they explain little quirks in the character's mythology, like whether he can transform any vehicle into a flaming instrument of death. There's a surprising wealth of genuinely striking—even beautiful—imagery, like in Ghost Rider's exorcism sequence, and in general Neveldine and Taylor are so successful at putting the audience in the middle of the action that all of the stunts have a real tangibility. (Cinematographer Brandon Trost, who previously shot MacGruber, is the film's unsung hero, and he's fast becoming an expert at creating superlative, high-quality images on a shoestring budget.)

On the other hand, the directors' constant use of wide-angle lenses actually works against the film's 3D because it creates an almost one-dimensional depth. The backgrounds go on for miles, but every object in them looks as flat as a pop-up book. Moreover, looking at the screen from any perspective where it's not fully occupying the viewer's field of vision, there's a dwarfing effect on the actual content, making the film look even smaller and cheaper than it obviously was. At the very least, that 3D is clear and discernible to the eye without any strain, but it feels too small and unobtrusive to enhance the moviegoing experience.

Weirdly, Spirit of Vengeance is a film that earns a certain kind of likeability, not unlike other gonzo experiences such as Torque or Punisher: War Zone, but the only reason it's not a complete letdown is because audience expectations start out so low. Cage abets himself of either excessive self-seriousness or manic unpredictability, and Neveldine and Taylor do their best impersonation of their now-trademark style even without the financial resources to maximize its impact on the story. Ultimately, Ghost Rider: Spirit of Vengeance doesn't feel destined to go down as a polarizing cult oddity or even an historic disaster, but as a modestly engaging, slightly more memorable way to pass the time than its predecessor—a diversion that ranks among its makers' better efforts, without deserving to be called "good."