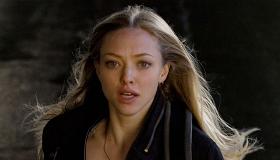 In Heitor Dhalia's Gone, Amanda Seyfried plays a young woman named Jill, a jittery waitress convinced that the man who abducted her a few years earlier is going to return for the one girl who got away. When her sister goes missing, Jill has no doubts as to who's responsible. So Jill puts on her vigilante smolder and sets out to take care of business, attempting to restore her agency and fulfill the fantasies of all the sexual assault victims out there for whom catharsis will require more than a hectic 95 minutes. Allison Burnett's script sprints around a city that's flat and blue and as hollowed out as Jill herself, and with a title that's even more generic than the film's aesthetic, Gone will struggle to draw audiences. By next weekend, it'll be...wait for it... Not there, anymore.

Jill was abducted, bound and gagged in the bottom of a well somewhere in the Oregon forests, and kept there by her anonymous captor until he made the mistake of hopping in the well and trying to kill her. That's who Jill is. She's not nice or mean or funny or any of the other things that a human can be—she's completely defined by her trauma. (Dhalia fractures Seyfried's face with mirrors and walls, at least until the frenzied plot overwhelms any sense of a consistent visual scheme.) She works the late-shift at a local diner, badgers the local cops every time a girl goes missing, and suffers from flashbacks that are so blue they look like deleted scenes from a Derek Jarman film. That's what Jill does.

Jill shares a house with her sister Molly (Emily Wickersham). They live together in the same desaturated, rain-soaked city where almost every American movie about a serial killer takes place—in this movie that city is called "Portland." It's not surprising that all of the country's serial killers have moved there, because Gone suggests that the Portland Police Department couldn't solve an episode of Scooby-Doo. Jill has spent some involuntary time in a mental institution, and that's all the local authorities need to be convinced that her abduction story was just a cry for help. When Molly goes missing and Jill leaps into a wide-eyed panic, the cops naturally ignore her. Here, the notion that the killer is a figment of Jill's imagination isn't saved for a lame late-game reveal; it's introduced early and often.

In fact, Gone is so quick to confront the cynical expectations of modern audiences that it often plays like a half-assed deconstruction of similar thrillers—Burnett's script scorns other films for treating the fallout of sexual violence as mere entertainment, arguing that vengeance can be silly but at least it's not cheap. To that end, one of the film's refreshingly few jump-scares is actually a meowing cat leaping out of a dark closet, as if Gone is reminding its audience that Jill's quest is primal, and not merely reflexive. Dhalia seldom leaves his heroine, and he should be commended for trying to illustrate the isolating effect that Jill's experience might have on a person's psyche, even if his predilection for low-angle close-ups constantly put her in a position of power. There's a strange purity at work here, a fixed eye for vindication that almost makes Gone feel like the Ashley Judd movie that Robert Bresson never got to make (surely, this was his life's greatest regret). Bresson, however, never made a film populated by such unrepentantly stupid characters, and he once made a film about a donkey.

The problem, in a nutshell, is that the film's few moments of psychosexual insight are overwhelmed by its plentiful moments of Amanda Seyfried sitting behind the wheel of a car with really big eyes. Like, really big. See, Jill is convinced that she has until sundown to save her sister, and her plan consists of yelling at strangers about her fictional grandparents and sticking a pistol in the face of every scraggly man she can find. Naturally, it's not long before the police are in pursuit, convinced that they have until sundown to save Jill from herself. In fact, most of the movie consists of Jill frantically borrowing cars in her continued attempts to run away from the cops...to be fair, one of the cops is played by Wes Bentley. (Actually, so many ominous dudes populate this movie that when someone describes a man as having "rapey eyes," they're not even talking about Wes Bentley.) This routine is only disrupted by the occasional scene in which an eerie old man makes a "Scrubs" reference or Jill tries to elude the authorities by invoking the power of Justin Bieber. The one supporting character who seems of potential interest to the plot leaves the movie because he has to bring his mother some soup.

Gone starts off as a character study about a woman struggling to regain control of her world in the wake of a horribly intrusive event, but that sort of thing doesn't make for a fun night at the movies, so it quickly concedes to a Hitchcockian "wrong woman" riff, in which sexually motivated abduction serves as the worst MacGuffin in movie history. The film forgets that Jill is only seeking validation (and then vengeance) as a means of restoring her sense of agency, instead it focuses on how the plight of an anguished woman is needlessly complicated by the incompetent men and women of a police force who pose Jill her most immediate threat. By the time Gone manages to steer Jill towards a fitfully gripping finale, it's impossible to care about whatever was there in the first place.